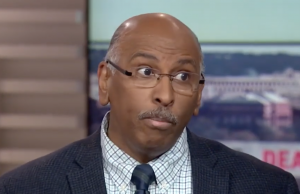 An MSNBC panel laid into President Donald Trump's muted response to the arrest of a white supremacist accused of planning a massacre, with one panelist saying Friday that Trump wasn't happy with law enforcement for foiling the alleged attack.

Coast Guard lieutenant and self-proclaimed white nationalist Christopher Paul Hasson was arrested last week on drug and weapons possessions charges, and investigators said he planned the killings of prominent Democrats and media members with the hopes of starting a race war. Trump said the situation was "a shame" on Friday and would be getting a fuller briefing, but he denied his rhetoric encouraged Hasson.

"Deadline: White House" host Nicolle Wallace said it gave her no pleasure to see Trump fail the leadership test on this issue. She castigated him for tweeting about things like the Jussie Smollett case—she said the actor accused of perpetrating a hate crime hoax did something "inane"—and ignoring Hasson.

Former Republican National Committee chairman Michael Steele said his "glass was no longer half full," saying he wasn't surprised a self-proclaimed nationalist like Trump would fail to speak out against a white nationalist.

"Is that where we are?" Wallace asked.

"That's where we are," Steele said, saying he couldn't be hopeful that Trump would mature in his presidency.

"That's a brave thing to say," Wallace said. "Let me just draw you out on that. If he'd carried out his attacks, what do you think the president would have done?"

"That's the next test in all of this," Steele said. "That's a very good question, and it's absolutely the next test, because we can sit here and honestly say we would hope that there would be the appropriate level of outrage and pushback and all hands on deck … I don't know what he would do, and that's the sad spot about all of this."

Wallace, who is often dazzled by her guests, said he was blowing her mind.