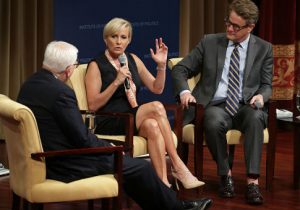 The panel on MSNBC's "Morning Joe" slammed author Michael Wolff on Thursday for spreading an unfounded rumor last week about U.S. Ambassador to the United Nations Nikki Haley having an affair with President Donald Trump.

Wolff, the author of the controversial anti-Trump book, Fire and Fury: Inside the Trump White House, told HBO's Bill Maher a couple weeks ago that he is "absolutely sure" Trump is having an affair while in office, but he couldn't provide any evidence to prove it. Wolff added that he left a clue in his book, and that "when you hit that paragraph, you're gonna say, ‘Bingo.'"

Readers have pointed to a passage in the book, where Wolff talks about Haley spending time alone with Trump on Air Force One and that he is grooming her for national political future. This prompted her to push back and say that she had only been on Air Force One once and that she was in a room with several people.

"I've never talked once to the president about my future and I am never alone with him," Haley said. "At every point in my life, I've noticed that if you speak your mind and you're strong about it and you say what you believe, there is a small percentage of people that resent that and the way they deal with it is to try and throw arrows, lies or not."

"Morning Joe" guest and Republican strategist Susan Del Percio confronted Wolff over news that he was making regarding the affair rumors, calling it "so irresponsible."

"After a lot of rumors came out, it was speculation that you meant Nikki Haley and you said she's embraced it. Don't you find that absolutely irresponsible at this point of time when you are talking about a woman who is a high profile woman in Trump administration to go after her without any evidence, without any facts. It just seems that it is so irresponsible," Percio said.

Wolff pushed back and said that he didn't go after Haley and that he found it "puzzling" that Haley would deny something she wasn't accused of.

Co-host Mika Brzezinski asked Wolff if he regretted implying anything about Haley.

"I didn't infer anything about Nikki Haley. What I inferred was that many of the people around the president believe he is still involved with various women," Wolff said.

He went on to say that people in the White House were "in a panic" that Haley was having an affair with Trump when she was being considered for secretary of state last year.

Brzezinski was not satisfied with Wolff's explanation and said that Wolff might be having fun dancing around with his rumors, but she said that he was "slurring a woman" and that it was "disgraceful."

"Mika, again she has been accused of nothing. She has decided to deny what she has not been accused of. Certainly I didn't accuse her of this," Wolff said.

"Are you suggesting the language is not ambiguous in any way in the things that you have said and the way you have stated it?" another panelist asked Wolff.

Brzezinski interjected and told Wolff that he is on the set of "Morning Joe" and that "we don't BS here."

Wolff asked her to read him the language of what he said, prompting her to end the segment and go to commercial.

"I'm not reading you anything. If you don't get it and you don't get what we are talking about, I'm sorry. This is awkward. You're on the set with us, but we're done," Brzezinski said.

Following the segment, Wolff sent out several tweets going after Brzezinski and saying that Trump was "right" about her. This appears to be in reference to an old tweet where he called her "low I.Q. Crazy Mika"

My bad, the President is right about Mika.

"In other words, I had to say what Mika wanted me to say, or else…the hook!" Wolff tweeted.

In other words, I had to say what Mika wanted me to say, or else…the hook!

"The last time I was on Morning Joe off camera Joe and Mika eager to gossip about who Trump might be sleeping with," Wolff wrote.

The last time I was on Morning Joe off camera Joe and Mika eager to gossip about who Trump might be sleeping with.

"It does ring true to a lot of people who've reported closely on this White House, including me," author John Heilemann said.

"Morning Joe" co-host Mika Brzezinski said of one anecdote in the story that was inaccurate: "The spirit of it was completely true."

Fellow "Morning Joe" host Joe Scarborough brushed off what he called insignificant errors, cautioning, "It's not a front-page story for the New York Times or the Washington Post. It's a much bigger picture."

"Criticism of Michael's book, though, is that he doesn't get everything exactly right. That's what happens when you interview 1,000 different people, and everybody comes from their own version," Scarborough said while Wolff sat next to him.