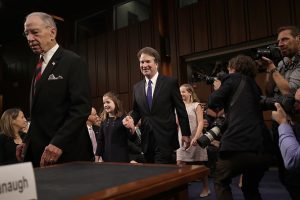 Sens. Heidi Heitkamp (N.D.) and Joe Manchin (W.Va.) said they have not heard anything that would lead them to vote against the president’s choice for the highest court, CNN reports.

When asked if she had heard anything that would disqualify Kavanaugh, Heitkamp responded, "Not so far."

"No, I haven't seen anything from that standpoint," Manchin said, while adding, "He's handled himself very professionally."

Nevertheless, Manchin also criticized the conduct of Republican and Democratic colleagues during the nomination process, remarking, "Both sides have been deplorable in how they've handled themselves."

Both Democrats said they would make a final decision after hearings conclude this week. Republican Sens. Susan Collins (Maine) and Lisa Murkowski (Alaska), both of whom are considered possible swing votes, have also spoken of Kavanaugh in good terms.

"I don't really understand their level of outrage when they had already made clear they were going to vote against any nominee that the president put forward," she said.

"Anybody who announces how they're going to vote before a president makes their appointment, there's no commonsense or reasoning in that whatsoever," Manchin said.

Kavanaugh’s nomination could pose challenges for Democrats running for reelection in states the president won in 2016. Support for Kavanaugh exceeds 60 percent in North Dakota, Montana, West Virginia, and Missouri.

Vulnerable Democrats such as Manchin, Heitkamp, and Sen. Joe Donnelly (Ind.) have said they will not be swayed by party leaders like Senate Minority Leader Chuck Schumer (D., N.Y.).

"My decision won’t have anything to do with Chuck Schumer," Donnelly insisted in July.

"I'll be 71 years old in August, you're going to whip me? Kiss my you know what," Manchin said.