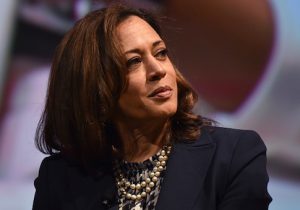 A misconduct claim against a longtime aide of Sen. Kamala Harris (D., Calif.) was brought to the attention of Harris' office months earlier than previously believed, the Sacramento Bee reported Friday.

A claim naming Larry Wallace arrived at the California Department of Justice in October 2016, three months before Harris left the attorney general’s office in early 2017. Harris has denied having any knowledge of the claim or alleged harassment.

The Bee previously reported that in December 2016 an employee filed suit against Wallace, accusing him of harassment and retaliation. The suit itself was made just as Harris left her post as attorney general to serve as California's junior senator. Wallace served as her director of the California Justice Department's law enforcement division.

Harris, who has known Wallace for 14 years, then hired him in March 2017 as a senior adviser in her Sacramento field office. Wallace settled with Harris' replacement at attorney general for $400,000 two months later, in May 2017.

Wallace worked for Harris until earlier this month when he resigned. The Washington Free Beacon reported at the time:

Harris' office claimed it was unaware of a lawsuit filed in December 2016 by Danielle Hartley against Larry Wallace, who was director of the California Justice Department's law enforcement division under Harris. At that time, Harris had just been elected to the U.S. Senate and was preparing to transition to Washington.

"We were unaware of this issue and take accusations of harassment extremely seriously. This evening, Mr. Wallace offered his resignation to the senator and she accepted it," Harris spokeswoman Lily Adams wrote in an email to the Sacramento Bee, who broke the story.

The latest information, however, as reported by the Bee, suggests Harris had longer than previously reported to discover and act on the allegations.

When Wallace resigned earlier this month, some were already alarmed that Harris could have been unaware of misconduct in her office while she served as attorney general and that she hired the offending employee to work for her Senate office. "For Harris to flatly deny any knowledge of this settlement seems, shall we say, far-fetched. For the moment, let’s take her at her word," the Bee editorial board wrote. "A second and equally troubling interpretation is that Harris isn’t a terribly good manager, and that her staff was insulating her from information critical to the performance of her duties."

The misconduct was known to others in the office for which Harris was responsible, according to the Bee.

Harris is widely expected to run for president in 2020. Her purported ignorance of employee misconduct and the concomitant lawsuit potentially clash with her vocal support for the #MeToo movement. The Bee‘s editorial board worried the revelations bode ill for her presidential ambitions. "This is hardly a propitious beginning to a presidential candidacy," the board wrote.