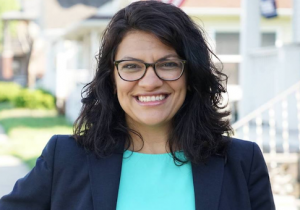 Michigan Democrat Rashida Tlaib's J Street endorsement is being reconsidered due to several policy shifts on Israel since she won her primary.

Tlaib, a Palestinian American who won an August Democratic primary and will run uncontested for a House seat in November, has dramatically shifted her positions on key issues since her win, stating that she would "absolutely" vote against providing aid to Israel and then saying she opposes a two-state solution to the ongoing conflict. J Street, a liberal advocacy group highly critical of Israel, now says it's reconsidering its endorsement, saying Tlaib misrepresented her views to the group, according to Haaretz.

The organization’s biggest concern involves Tlaib’s apparent withdrawal of support for a negotiated two-state solution for the conflict. Throughout the vetting process, during which J Street decides which candidates to support, Rosenblum said, "we are clear and unequivocal with all the candidates who we consider for endorsement what our core principles and commitments are. We only endorse candidates who have affirmed support for them."

According to Rosenblum, "support for a two-state solution to the Israeli-Palestinian conflict" was the most important considerations in the group agreeing to offer its endorsement. […]

On the eve of the primary, Steve Tobocman, a senior adviser to Tlaib, told Haaretz that she supported a two-state solution. Tobocman added that while the Palestinian-American congressional nominee hasn’t issued any position papers regarding any other aspects of foreign policy, she has done so on the Israeli-Palestinian conflict, because she "sought out the support and received the endorsement of J Street."

Tlaib had come under fire for associating with J Street from far left anti-Israel activists, who declared victory earlier this week after Tlaib began shifting towards radical policy positions.

Tlaib also offered a different account of her relationship with J Street than was represented by the group to Haaretz, saying "never asked me once to waver on my stance."

"J Street helped me, but never asked me once to waver on my stance (I absolutely don’t agree with every single position and they don’t of mine), but as they said, they liked that my answers to their questions were from personal experiences and helped humanize what is happening in Palestine," she wrote on social media in response to the criticism.

"It has to be one state," Tlaib said. "Separate but equal does not work. I’m only 42 years old but my teachers were of that generation that marched with Martin Luther King. This whole idea of a two-state solution, it doesn’t work."

Tlaib also has come out in support of the Boycott, Divestment, and Sanctions (BDS), which aims to destroy Israel through economic warfare and is opposed by even liberal groups such as J Street.

"I stand by the rights of people who support BDS. Allow the students to be a part of the movement. I am so proud of the Center for Constitutional Rights in support of student movements for BDS. If you don’t support freedom of speech, you’re in the wrong country," Tlaib said this week.