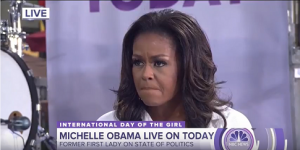 Former First Lady Michelle Obama responded to calls for incivility from Hillary Clinton and Eric Holder by arguing that Democrats should use hope, not fear, to motivate people.

"Which motto do you want them to live by?" Obama continued. "I have to think about that as a mother, as someone who's a role model to young girls. We want them to grow up with promise and hope, and we can't model something different if we want them to be better than that."

On Tuesday, Clinton told CNN's Christiane Amanpour that civility towards Republicans has to wait until after the November midterm elections.

"You cannot be civil with a political party that wants to destroy what you stand for, what you care about," Clinton said. "That's why I believe, if we are fortunate enough to win back the House and/or the Senate, that's when civility can start again."

Over the weekend, Holder cited Michelle Obama's quote from the 2016 convention directly, and then said, "No. When they go low, we kick them," prompting cheers and shouts of "fight, fight, fight" from the audience.

Clinton and Holder are not the only Democratic leaders to challenge civility this year.

In June, Rep. Maxine Waters (D., Calif.) told audience they should "create a crowd" if they see anyone from President Donald Trump's cabinet and "tell them they’re not welcome anymore, anywhere."