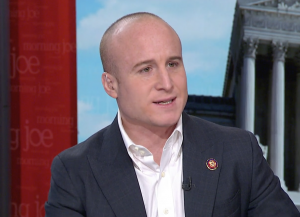 Rose did, however, defend Democratic leadership's response to Omar's comments and its decision to keep the freshman congresswoman on the House Foreign Affairs Committee. Omar "understands that that’s a possibility and nobody is taking that off the table, but we are not there yet," Rose said.

Rose said he was "horrified and sad" when Omar made the dual loyalty comments. I "stepped in front of my party’s leadership and I was the first member of the Democratic Party to criticize her," he said.

"I did say that I accepted her apology. You know why I did that? Because I am an adult. Because my goal was to continue the quiet and non-glamorous actions of coalition-building and trying to protect the people in this room from those comments being made," Rose continued.

Omar made anti-Semitic comments at an event in Washington, D.C. last month, saying she wanted "to talk about the political influence in this country that says it is okay for people to push for allegiance to a foreign country."

Omar doubled-down on her remarks in tweets directed at fellow Democratic congresswoman Nita Lowey (N.Y.), in which she repeated the anti-Semitic dual-loyalty canard.

House Democratic leaders scrambled to write a resolution condemning various forms of hatred in the wake of her remarks, which was overwhelmingly passed.

Omar had previously drawn scrutiny for separate remarks, and she apologized in early February for anti-Semitic tweets, many of which were later quietly deleted. She also acknowledged a tweet in which she accused Israel of hypnotizing the world and performing evil acts was "unfortunate."