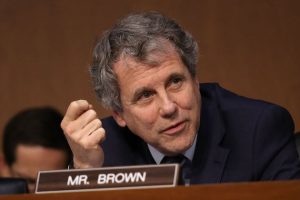 The Columbus Dispatch, one of the largest newspapers in Ohio, published an article slamming Republican Senate candidate Rep. Jim Renacci for accusing Sen. Sherrod Brown (D.) of wanting to adopt a single-player health plan when he was not a recent co-sponsor of "Medicare for All."

Renacci said that Brown "wants to take away your health insurance" and replace it with a government-financed health care plan similar to Medicare, but the Dispatch said this wasn't true because he declined to sign up as a co-sponsor to a "Medicare for All" bill introduced by Sen. Bernie Sanders (I., Vt.).

At the time, though, Brown said in a statement that he has "always been supportive of Medicare for all," but was currently focused on another bill to let Americans buy into Medicare at age 55.

Additionally, Brown has for years been a supporter of a single-payer health care system.

In 2005, Brown co-sponsored The Expanded And Improved Medicare For All Act, which would have established a nationwide universal single-payer health care system.

In 2009, he told MSNBC that during the Obamacare debate, "I was originally for single-payer."

He said that year that he always supported a single-payer system, but it wouldn't happen in this Congress.