Louisiana Gov. Jon Bel Edwards (D.) called his state's record on the gender pay gap "an embarrassment and an outrage," but he has failed to attain gender pay equality in his own office, according to records of salaries paid in the governor's office obtained by the Washington Free Beacon.

Edwards has spent the past year pushing for a state gender discrimination law. Earlier this month, Edwards and his wife held an "Equal Pay Summit" after Louisiana ranked last in Bloomberg's gender-equality ratings.

Salary data obtained through Louisiana's Department of State Civil Service, however, shows that Edwards has his own gender pay gap, as women working in his office make just 82 cents for each dollar earned by men.

The governor's office employed 20 more women than men at the time the data was shared, but they were far more likely to be working for lower wages. 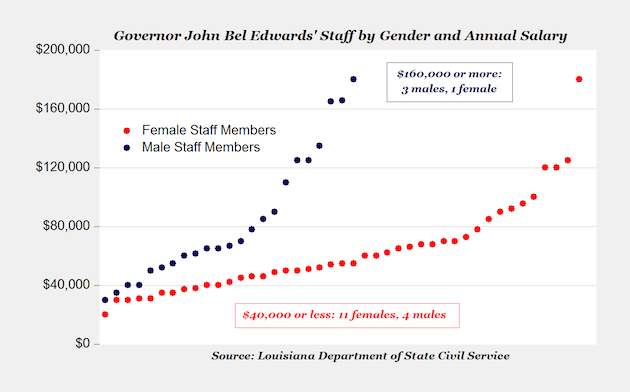 Richard Carbo, the top spokesman for Edwards' office, pointed out that the previous administration determined the salaries of many of the governor's staff. Edwards criticized some of those salaries as "exorbitant" during the campaign.

Carbo also said that employees in the same role are paid the same regardless of gender.

"A lower level staffer within the governor's office wouldn't make the same as a more senior level person," Carbo said.

"The governor has never insisted that everyone make the same regardless of what position they hold, but rather that a women doing the same job as a man with similar qualifications and experience should be paid the same," Carbo said. "By that measure, the governor has upheld his responsibility. Individuals carrying the same role are, in fact, paid the same—both male and female."

Mark Perry, a University of Michigan economics professor and expert on wage discrepancies, told the Free Beacon it was hypocritical for Edwards to make excuses for his gender pay gap while accusing Louisiana businesses of discrimination, adding that "gender activists can't have it both ways."

"They like to use the unadjusted pay gap to point to a problem, but when you point to their pay gap they want to do all the adjustments to show that—when adjusted for position, education, experience, and seniority—there isn't a pay gap," Perry said.

Perry pointed out numerous reasons for the pay gap beyond discrimination, such as the fact that the governor's office likely hires employees straight out of college and that a majority of college graduates are women.

Perry, who recently wrote that evidence of a pay gap is as "elusive as Bigfoot sightings," said that if Edwards truly believes, as he has said, that women bring home just 66 percent of what their male counterparts do, then the state should go after companies for illegal discrimination.

"What they're saying is that they've uncovered massive amounts of illegal activity and they should be out prosecuting that," Perry said. "Instead of having a summit. Why not just hire some attorneys to go after all these companies guilty of discrimination?"