I carried a gun around the event zone at the Republican National Convention, and it was no big deal.

Ever since I got my Virginia Permit to Carry a Concealed Handgun, I carry a handgun on me wherever I legally can. So, when I was picked to be one of the lucky (?) Freebeaconers to travel to Cleveland (!) for the RNC this year, it was only natural that I would carry there, too. After all, a responsible gun owner ought to treat their gun like their American Express: never leave home without it. 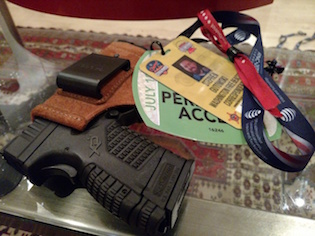 In much the same way that you don’t keep a fire extinguisher in your home because you think a fire is lurking around every corner or that the fire department wouldn’t do their best to put out a fire that did occur, you don’t carry a firearm because you expect to be attacked at any given moment or think the police will not come to your aid if you call them. No, you do it because the world is an unpredictable place–more unpredictable than most people want to admit.

The RNC certainly presented a completely unpredictable environment to any observer of this election cycle. Minor Trump speeches have been marred with violent protests throughout the campaign. In Chicago, Trump had to cancel a speech because of angry protesters. In San Jose, Calif., Trump supporters were assaulted while walking down the street in broad daylight.

Combine those kinds of protests with the media hype–and it did turn out to just be hype–about the potential for Cleveland to be flooded with open-carrying Trump supporters, and you have a potentially volatile mix. So, I packed up my Springfield XDS 9mm—the new one with the four-inch barrel—and I flew to Cleveland. It was actually my first time flying with a gun—which is perfectly legal—and it was surprisingly simple to check the gun, even at BWI in anti-gun Maryland.

Since it is my nature to always forget something important when I go on a trip, I managed to leave my amazing Alien Gear holster at home. Luckily, my very first story took me to every local gun shop in the Cleveland area, and I managed to pick up a cheap Galco holster that worked out fine for the week. I also got a little bit of range time (don’t tell my editors) with a fellow NRA-certified instructor who was kind enough to chauffeur me around all day.

The biggest challenge was to figure out exactly where it was legal for me to carry in Cleveland during the RNC. It didn’t take long to get accustomed to Ohio’s carry laws since they are pretty similar to Virginia’s. You can’t carry into schools or government buildings or courthouses and so forth. It is a misdemeanor if you knowingly carry on private property that has no-guns signs posted, a minor difference from Virginia. You can carry in restaurants that serve alcohol as long as you don’t drink any yourself, not much of a problem for me since I don’t drink much anyway.

The real struggle was figuring out the RNC-specific rules. Despite the media frenzy over the fact that guns were going to be allowed in the RNC’s "event zone" while tennis balls, and other random things, would be banned, it was pretty damn hard to figure out exactly where the event zone was. Was it the same thing as the "perimeter" that I had a badge to get into? Was it everything up to the Q but not inside the Q itself?

Turns out it was not that hard to figure out once I got to downtown Cleveland. It was perfectly legal for me to carry concealed—and since my goal in carrying a gun is self-protection and not political protest, my gun was, and always is, concealed—anywhere outside the zombie apocalypse-esque quarantine fences that surrounded the Q and Progressive Field. I could not bring my gun with me when I went into the convention, but I could have it whenever I was not in the stadium. And that’s exactly what I did. 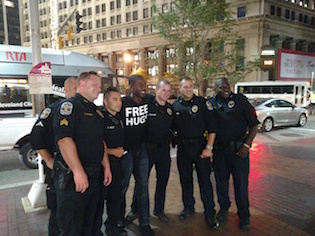 I was armed when I interacted with protesters, politicos, reporters, vendors, waiters, street performers, and sandwich shop employees. I was packing in Public Square. I had my gun on me when I got a hug from the Free Hugs guy (who is a great hugger, by the way). It was on my hip at the BuzzFeed rooftop party for blacklisted reporters, which I was briefly blacklisted from for lack of an invite.

I had it on while I was checking out the restaurant the Washington Post took over. It never left my side while I drank boxed (yes, boxed) water and played mini-golf on the roof of the Twitter lounge overlooking East 4th street.

It wasn’t exactly like carrying back at home in my everyday life, but it wasn’t far off either. I went about my day the same way whether I had the gun on me or not, though I do usually feel a bit naked without it. The massive police presence put most of the concerns about protesters at ease, but it also raised a few questions in my mind.

Would any of the hundreds, possibly thousands, of police I pass notice the gun concealed under that picture of Bill Kristol’s face? Was carrying even necessary at all here while surrounded by so many cops? What kind of situation could occur where I would feel comfortable drawing my firearm when there are probably a dozen cops better equipped to handle anything that might unfold in the event zone? What about after midnight when I’m walking away from where all those cops are to try and find a place to catch a ride back to the Free Beacon’s temporary frat house?

I never felt like my Galco holster sat quite right against my back. But, even though the plastic clip on that cheap holster prints like Johannes Gutenberg, nobody noticed. And even if a police officer had noticed, I doubt it would have been much of an issue. Judging by how reasonable and cordial they were when dealing with open carriers, it did not seem like they were concerned with the legally armed.

There are some people who might have been bothered or even alarmed if they had noticed. Certainly not the Texas delegates I chatted up on the Twitter rooftop after Cruz made his big stand. No, I think some of the reporters from Politico or the Washington Post or CNN, or whoever else I met, were more likely to be put off by the presence of my XDS. Or, maybe, some of the tech people or party activists. Maybe even that nice (and gorgeous, for that matter) girl from Facebook I ran into a couple of times. That’d be a shame.

There were a number of people who I saw both when I was carrying and when I wasn’t. It did not change the way I treated them. I do wonder if all of them would do the same if they knew I was carrying, though.

It will be interesting to see if any of those who read this will treat me differently next week at the Democratic National Convention. Will I get blacklisted from the parties for real this time? Will they look at me differently? Fear me? Despise me? I hope not. I don’t think there is a good reason for anybody to react that way. But that doesn’t mean it won’t happen.