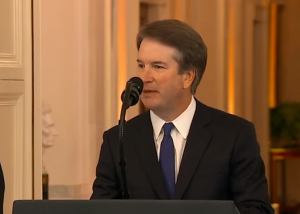 Supreme Court nominee Brett Kavanaugh denies a heavily disputed allegation of sexual misconduct from his Yale days, concerning an accusation that he drunkenly exposed himself to a classmate.

Kavanaugh's Yale classmate Deborah Ramirez told The New Yorker that Kavanaugh thrust his penis into her face at a party, causing her to inadvertently touch it as she pushed him away. The charge follows the explosive accusation by Christine Blasey Ford, who came forward last week to accuse Kavanaugh of sexual assault when they were teenagers at a house party in the early 1980s. Both women have called for an FBI investigation into their claims.

Kavanaugh called the claim a "smear, plain and simple," and President Donald Trump continues to stand by him.

"This alleged event from 35 years ago did not happen," Kavanaugh wrote in a statement. "The people who knew me then know that this did not happen, and have said so. This is a smear, plain and simple. I look forward to testifying on Thursday about the truth, and defending my good name—and the reputation for character and integrity I have spent a lifetime building—against these last-minute allegations."

Ramirez recounted to The New Yorker that she was invited to a dorm party during the 1983-84 school year and became inebriated while playing a drinking game. She said she then remembers Kavanaugh exposing himself to her and laughing, leaving her feeling humiliated. However, the article also states Ramirez did not initially feel confident in pointing the finger at Kavanaugh, but after, in the article's words, "six days of carefully assessing her memories and consulting with her attorney," she felt able to do so.

She also admitted having gaps in her memories of the evening. The New Yorker itself acknowledged it "has not confirmed with other eyewitnesses that Kavanaugh was present at the party."

Several witnesses went on the record to say "with confidence" that Ramirez's story was untrue:

In a statement, two of those male classmates who Ramirez alleged were involved in the incident, the wife of a third male student she said was involved, and three other classmates, Dino Ewing, Louisa Garry, and Dan Murphy, disputed Ramirez’s account of events: "We were the people closest to Brett Kavanaugh during his first year at Yale. He was a roommate to some of us, and we spent a great deal of time with him, including in the dorm where this incident allegedly took place. Some of us were also friends with Debbie Ramirez during and after her time at Yale. We can say with confidence that if the incident Debbie alleges ever occurred, we would have seen or heard about it—and we did not. The behavior she describes would be completely out of character for Brett. In addition, some of us knew Debbie long after Yale, and she never described this incident until Brett’s Supreme Court nomination was pending. Editors from the New Yorker contacted some of us because we are the people who would know the truth, and we told them that we never saw or heard about this."

The former friend who was married to the male classmate alleged to be involved, and who signed the statement, said of Ramirez, "This is a woman I was best friends with. We shared intimate details of our lives. And I was never told this story by her, or by anyone else. It never came up. I didn’t see it; I never heard of it happening." She said she hadn’t spoken with Ramirez for about ten years, but that the two women had been close all through college, and Kavanaugh had remained part of what she called their "larger social circle." In an initial conversation with The New Yorker, she suggested that Ramirez may have been politically motivated. Later, she said that she did not know if this was the case.

One classmate who asked to remain unidentified said he was "one-hundred-per-cent sure" that he was told by someone else that Kavanaugh exposed himself to Ramirez. Other witnesses gave halting responses that said it "could" have occurred and there was a hard-drinking culture at Yale.

Ramirez is a registered Democrat but says she is not motivated by political opposition to Kavanaugh, who is loathed by progressives. Senate Democrats have worked ever since Trump nominated him to torpedo his path to the Supreme Court.

Ramirez's story caught the awareness of several news outlets, but she only spoke with The New Yorker about it. It was co-authored by Jane Mayer and Ronan Farrow, the latter of whom has become known for breaking stories about the #MeToo movement concerning powerful men accused of sexual misconduct.

The New York Times reported it "interviewed several dozen people over the past week in an attempt to corroborate her story, and could find no one with firsthand knowledge" of Ramirez's claim.

The New Yorker reported Senate Democrats were made aware of the Ramirez situation by a civil rights lawyer and began investigating the claim. Farrow told ABC News that "she came forward because Senate Democrats began looking at this claim. She did not flag this for those Democrats. This came to the attention of people on the hill independently and it’s really cornered her into an awkward position."

The 11th-hour public accusations of sexual misconduct have endangered Kavanaugh's confirmation, which looked certain two weeks ago with no Senate Republicans indicating opposition to him.

Like Ramirez's story, Ford's allegation also contains some holes. Ford said she couldn't be sure of the exact year the party where she says the assault took place. Four witnesses—including Kavanaugh—who Ford says were at the party have also denied any knowledge of the party or any assault.