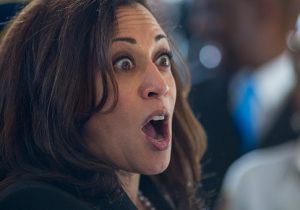 Sen. Kamala Harris (D., Calif.) could lose her seat on the Senate Judiciary Committee according to a Sunday report from the Washington Post.

The committee is central in Supreme Court justice confirmations, attorney general confirmations, and oversight of special counsel Robert Mueller’s Russia investigation, all issues bringing a lot of media spotlight, which would be beneficial to the first term senator if she decides to run in 2020.

Liberal advocacy groups like Demand Justice are trying to find a way for Harris to stay on the committee.

"Not only would it be unconscionable to remove the only African American woman from the committee, but Sen. Harris also is the most skilled questioner on the entire panel," said Brian Fallon, executive director of Demand Justice. "Whatever options they need to consider, removing Harris should not be one of them. The backlash would be intense."

Harris wants to stay on the committee, the Post reports.

Shortly after the midterm elections, Harris told Sen. Charles E. Schumer (D-N.Y.) that she wanted to stay on the Judiciary panel, according to her spokeswoman, Lily Adams. For Democrats who have repeatedly pointed out that the Republican side of the dais is all male and all white, the prospect of losing Harris is anathema.

Discussions on the committee's size will begin after a run-off election in Mississippi on Tuesday to determine the state's newest senator. Senate Majority Leader Mitch McConnell (R., Ky.) and Schumer could agree to increase the size of the committee, which would allow more Republicans to serve and Harris to stay. A similar agreement was made after 2014 when Republicans took back the majority in the Senate and allowed Sen. Richard Blumenthal (D., Conn.) to continue to serve.

"Senator Kamala Harris is a terrific member of the Senate Judiciary Committee and we are going to do everything we can to keep her there," Schumer said in a statement.

Earlier this year, Harris made headlines for her behavior during Supreme Court Justice Brett Kavanaugh's confirmation hearings. She insinuated without evidence that Kavanaugh had secret conversations related to the Mueller investigation with someone at the law firm Kasowitz Benson Torres. She released a video showing deceptively edited comments from Kavanaugh about birth control and also fundraised during Kavanaugh's hearing.