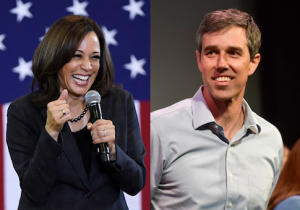 "We are facing something unprecedented: a record number of Democrats—including a record number of women and people of color—are running for President," the Thursday morning email from Harris said. "I look forward to engaging in substantive debates with each of these candidates—including the newest to join the race today, Beto O’Rourke—and ultimately selecting a Democratic nominee who will take on and beat Donald Trump in November of 2020."

The email goes on to ask for money, telling supporters the campaign needs "to continue building on our momentum in these early months."

"To run a winning campaign, we are going to have to cut through the noise of this crowded primary and share our message with as many voters as possible," Harris wrote.

Fundraising emails from Democratic presidential contenders such as Harris are sent often, but this is the first she's sent tied to one of her competitors.

The email came just a few hours after O'Rourke announced his campaign on social media. O'Rourke proved to be a fundraising power-house during his failed Texas Senate campaign.