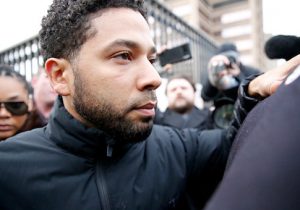 A Chicago grand jury has indicted Empire actor Jussie Smollett on 16 felony accounts of disorderly conduct after he allegedly lied to police about being the victim of a hate crime, NBC reports.

Smollett, who is gay and African American, claimed attackers yelled racist and homophobic slurs at him in the early morning of Jan. 29, poured bleach on him, tied a rope around his neck, and yelled "This is MAGA country." The assault drew national attention, with some 2020 candidates like Sen. Kamala Harris (D., Calif.) initially comparing it to a "modern-day lynching" attempt.

Smollett gave an impassioned interview defending his story on ABC News as skepticism grew around his claims.

Smollett turned himself in to police last month and Chicago Police Superintendent Eddie Johnson told reporters the actor made up the assault. Johnson claimed Smollett was upset with his salary, prompting the actor to send a fake, threatening letter to himself with "MAGA" written on it. He said Smollett then paid two brothers, one an extra on "Empire" and the other his personal trainer, $3,500 to attack him.

"I'm left hanging my head and asking why," Johnson said. "Why would anyone, especially an African-American man, use the symbolism of a noose to make false accusations? How could someone look at the hatred and suffering associated with that symbol and see an opportunity to manipulate that symbol to further his own public profile?"

Smollett and his lawyers have maintained his innocence. The actor has been written out of the final episodes of the show's upcoming season/