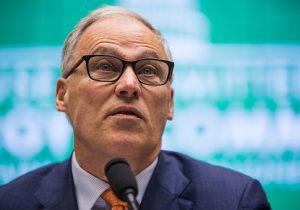 Washington governor and Democratic presidential candidate Jay Inslee said that if America is to make any major reforms in health care and in climate change, it would first need to scrap "archaic" institutions like the Electoral College and the Senate filibuster.

Inslee, who is running a climate change centered campaign for president, made the remarks Thursday during an appearance on CBS This Morning with John Dickerson, Gayle King, and Norah O'Donnell. During the segment, Inslee was asked about his recent calls to "reform" or abandon longstanding pillars of the country's constitutional framework.

"There's nothing wrong with saying Democracy can be reformed and improved," Inslee said. "We know we need to get rid of gerrymandering… I believe that it's time to have popular elections so people's votes decide who the president is rather than the Electoral College."

"You want to abolish the electoral college," O'Donnell interceded.

"Yes, the Electoral College needs to go," Inslee responded. "Importantly, if this nation is going to make any major reforms in health care, in climate change, the filibuster needs to go. It's archaic. It's time has passed, it's time for us to have Democracy again and movement in this country."

"How much traction are you getting?" King asked. "A lot of people say it has to go, it has to go, but yet here we are a gazillion years later and it's still here."

"We are making progress. Actually, we have an agreement among multiple states to be bound by the popular vote," Inslee said. "We only need a few more to make that compact effective so you can essentially effectuate the popular vote, even without a constitutional amendment."

"This is the popular will," the governor continued. "We ought to have one person—one vote, and we ought to have the ability to move a clean energy economy. Look it, I'm the only candidate who's saying this. We're the first generation to feel the sting of climate change. We're the last generation who can do something about it, and we have to make defeating climate change the number one priority."

Inslee criticized congressional Republicans in February for failing "to stand up" for the Constitution in the face of President Donald Trump's national emergency declaration.