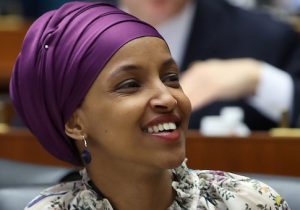 Omar appeared on the Nation’s "Next Left" podcast with host John Nichols to discuss various issues, including the intelligence of Trump supporters.

"So suddenly you’re elected, and you had this teaching moment. It strikes me that, in watching you, you are conscious of teaching moments and of that opportunity to say something that might cause people to think differently about what’s going on," Nichols said.

Omar said U.S. voters "have a misconception" about refugees and the process they face getting into the United States. She went on to specifically target Republicans in her criticism, saying they "are really good at misinformation and sort of really reorganizing facts to sort of paint a picture that really eventually is not rooted in facts."

She said Minnesota Republicans who want to stop refugees from coming to the state spread misinformation about how refugee resettlement works.

"There are agencies that run the resettlement program. This is a process that’s run through them. If you end that contract, it’s not that refugees are not going to be resettled, it’s that the state just doesn’t get informed," Omar said. "And so the only leverage you have is that you are part of this contract and you can be part of the negotiations on how many people get resettled in your state."

"And so it is not that they might not be knowledgeable about this, but they use it as a tool to stir up hate and division. And ignorance really is pervasive in many parts of this country. And as someone who was raised by educators, I really like to inform people about things that they might be ignorant to, willingly or unwillingly," Omar continued.

Omar is far from the first to assert that Republicans gain support by taking advantage of the supposed backwardness of everyday Americans. CNN political commentator Kirsten Powers said last November that Trump's supporters were racist, and former Democratic National Committee chairman Howard Dean equated his voter base to Neo-Nazis burning a swastika.