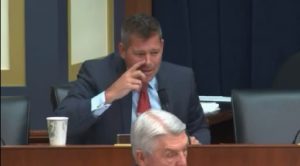 Rep. Maxine Waters (D., Calif.) and other House Democrats called an amendment to the Green New Deal from Rep. Sean Duffy (R., Wis.) "not serious," during a Wednesday House Financial Services Committee meeting that addressed a portion of the bill proposing a provision requiring energy-efficient housing.

Duffy's amendment criticized the bill for requiring that all American housing units "retroactively upgrade" to renewable energies such as wind turbines or solar power. Duffy noted that such upgrades would not be feasible in his home state of Wisconsin.

Duffy said that this portion the Green New Deal was "catastrophic for American housing," and requested that his amendment to it be debated. Waters refused Duffy's request upon learning that he did not plan to vote in favor of the amendment, saying that it wasn't "serious."

"Is the gentlelady chairwoman saying that the Green New Deal is not serious?" Duffy asked Waters.

"I beg your pardon," Waters said.

"You said this is not serious. Are you saying that the Green New Deal is not serious?" Duffy asked. "I just want to make sure so I can get a gauge on it."

"You are not serious," Waters reiterated.

"We need to look for real ways to make our homes more energy efficient and sustainable," Waters said. "This amendment does not reflect a thoughtful approach to the topic."

Democratic representative Lacy Clay (Mo.) backed up Waters's statements and criticized Duffy for questioning the bill, which he said did address practical solutions, but rather a "broader" vision for America.

"I think it's so hypocritical that we are going to inject a piece of legislation, which is really more of a broader construct and a framework for discussion about where we should be heading as a country when it comes to climate change when it comes to scientific fact about what is happening to our atmosphere and the earth that we live on," he said.

Duffy responded, saying that a refusal to discuss the impracticality of the housing portions of the Green New Deal was a refusal to seriously address the problem of affordable housing in America.

"I do think it's appropriate to debate it and to discredit it because I think the gentleman understands that is going to drive up the cost of housing," he said. "We're not going to put more people in a home. We're going to kick more people out of a home."

When the amendment was called to a vote, every single Democrat on the committee voted against it.

"I gave several of the Green New Deal's cosponsors the opportunity to debate and vote on their ridiculous Green New Deal legislation, but they were afraid to debate it, labeled it as not serious, and ultimately voted against it because they know this disastrous plan hurts families," Duffy told the Washington Free Beacon in a statement.