PHILADELPHIA—Gun control activists at a Tuesday event in Philadelphia expressed confidence that Hillary Clinton would advance their legislative agenda if elected president.

The crowd of roughly one hundred activists cheered praise for Clinton and calls for new gun laws as volunteers handed out bottled water and popsicles to stave off the summer heat.

Attendees at the event voiced strong support for Clinton. Nancy Gordon, the president for the gun control group Ceasefire Pennsylvania, which co-sponsored the event, told the Washington Free Beacon she felt "very confident" about Clinton.

"She will be with us and she has been already," Gordon said. "She has made this part of her platform. She has called for repeal of the law that prevents injured citizens and cities from suing gun manufacturers when they do bad things."

"She has been a supporter of this issue since the Million Mom March when she welcomed us to the White House and marched with us." 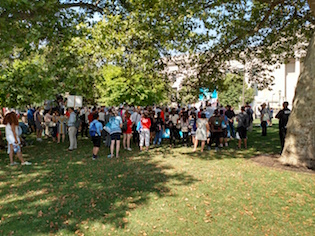 Another rally attendee, a Philadelphia native whose mother and son were killed in a 2005 shooting, said she has full confidence in Hillary Clinton's commitment to passing new gun control measures.

"She's protecting her grandchildren's future," Donna Giddings said. "That's a mother's love. Her sole purpose in life is to see her family live and pass on the legacy, the inheritance of the name of the Clintons. So, why wouldn't she?"

"She has a vested interest in this nation because she has grandchildren."

Murphy, who joked during his speech that he was "proud of [his] bladder" for withstanding a 15-hour filibuster in favor of a gun control vote, also said he trusted Clinton to advocate on behalf of gun control.

"She's sincere on this issue," Murphy said. "This is a turning point for the issue of gun violence. This is, all of a sudden, becoming an issue that voters are really considering when they go into the election booth and that's one of the reasons that it's a big issue here at the convention."

"It's great to have a big turnout of delegates who are demanding that the Democratic Party stay strong on the issue of gun violence. It's the right thing to do and it's good politics."

An Organizing for America member and DNC volunteer, Maryann Piccioni, said she was with Hillary. "Oh, by all means," Piccioni said. "I'm confident in Hillary. She’s my candidate."

Not every attendee was as committed to the soon-to-be nominee. Todd Ellison, a DNC delegate from Rhode Island and "big proponent for gun control" said he was jaded from past experiences with politicians.

"I'm hopeful, that's a good word," he said. "I'm hopeful. I've been hopeful for other leaders in the past to get things done on the issue of gun violence in our country and we haven't seen anything. So, I guess, I'm a little jaded."

"I think that Hillary Clinton will do more than Donald Trump will," he said.