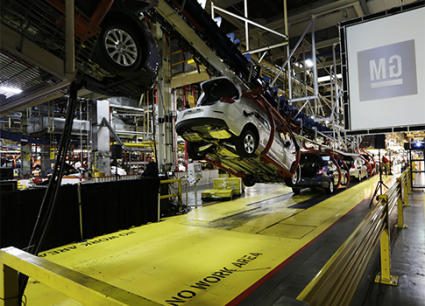 Bailout recipient General Motors leads the world in car sales thanks in part to subprime auto lending that may cause a fiscal calamity, financial and auto industry observers fear.

"You have the government trying to sell the bailout and this recovery and they’ve allowed, encouraged GM to revive itself off the back of subprime lending," said Ed Niedermeyer, auto industry consultant.

GM Financial (GMF), the company’s in-house financing arm, reported that delinquencies grew by about $200 million to $933 million in 2012, according to GM’s annual SEC filing.

Delinquent contracts at GM now represent 8.5 percent of all auto loans—higher than delinquencies at Ford, Toyota, and Honda combined.

All four companies have in-house financing arms that lend money to purchasers. GM’s structure differs from its competitors because it focuses primarily on subprime borrowers, while customers with higher credit scores opt for financing from Ally Bank.

"When you talk about our delinquency rate, GM Financial’s is higher than the industry average of captive lenders because 85 percent of our portfolio is subprime, whereas the portfolios of other captive lenders are predominantly prime," GM Financial spokeswoman Chrissy Heinke said. "So, it’s not an apples to apples comparison."

GM’s prime borrowers fall into delinquency at the industry average. Ally reported 1.6 percent in delinquencies in the quarter ending Sept. 30, 2012, its most recently available SEC filing.

General Motors is doubling down on the subprime strategy. Only 4 percent of GMF borrowers had credit scores above 660 in 2012, compared to nearly 8 percent in 2011.

Additionally, GMF now represents more than 7 percent of the entire subprime market and its number of subprime borrowers may be even higher, according to company executives.

President Barack Obama has repeatedly blamed subprime lending practices in the housing industry for the 2008 crash.

"We all know the story by now: Mortgages sold to people who couldn’t afford them, or even sometimes understand them," he told a Kansas audience in 2011. "Banks and investors allowed to keep packaging the risk and selling it off. Regulators who were supposed to warn us about the dangers of all this, but looked the other way or didn’t have the authority to look at all. … It combined the breathtaking greed of a few with irresponsibility all across the system. And it plunged our economy and the world into a crisis."

The administration created the Consumer Financial Protection Bureau (CFPB) to address the perceived lack of enforcement. The CFPB serves as a watchdog on complicated financial instruments such as subprime mortgages.

However, subprime auto loans are exempted from CFPB oversight thanks to opposition from industry interests.

"They didn't want to be subject to the same regulations as banks," one industry source said. "The administration and Democrats in Congress were more than willing to hand over the keys. They knew what a stalled auto sales market would mean for how people viewed the bailouts."

Obama made GM’s sales growth a centerpiece of his campaign during stops in Ohio and Michigan. The car company used flexible financing, pricing incentives, and other discounts to drive up volume, selling more than 9 million vehicles last year.

"Car sales have been the one economic indicator that the Obama administration has repeatedly pointed to as sign of recovery; we’re creating a bubble in order to make a government pet project look viable," Niedermeyer said. "GM is using subprime to move cars out doors but it won't last forever, and eventually the music is going to stop and we’re going to be back where we found them before the bailout."

The growth in car sales has not bolstered the company’s standing in domestic sales. GM’s market share fell to 17.5 percent, down from 18.8 percent when it launched its initial public offering in 2010.