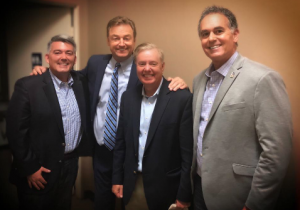 HENDERSON, Nev.—Republican senator Lindsey Graham (S.C.) said on Friday that the Democratic Party needed to face electoral consequences for the vitriol it unleashed during the confirmation hearings of Supreme Court justice Brett Kavanaugh.

At a rally for Republican senator Dean Heller, Graham said he had come to Nevada to campaign for the incumbent because of their work together in the Senate and the latter's support for Kavanaugh. "When I went to Dean to ask him to consider supporting Judge Kavanaugh, it took all of five minutes because he knew this was a good man."

Heller, the only sitting Republican senator running for reelection in a state carried by Hillary Clinton, is being challenged by first-term Democratic congresswoman Jacky Rosen. The incumbent, who was presumed to be vulnerable given Nevada's shifting demographics and Rosen's fundraising advantage, has consistently led the polls since the time of Kavanaugh's confirmation.

Graham said that while the upcoming midterms were defined by many issues, none were more important than the character and "attitude" of those on the ballot.

"The other side has proven how badly they want power," Graham said. "What else will you do to get power, if you want power so much you'll ruin a good man's character and his family."

Graham, who sits on the Judiciary Committee and had previously supported President Barack Obama's Supreme Court nominees, conveyed his anger over the Democrat's antics.

"I'm pissed," Graham said. "I voted for Sotomayor and Kagan because that's how it used to be … when a new president comes in he gets to choose the judicial nominees."

Invoking the attacks Democrats have made on prior Republican Supreme Court nominees, Graham asserted the party had to learn that there were electoral consequences for "playing dirty" and losing.

"Why is it always our people?" Graham asked. "Why us? Bork, Thomas, Alito, and now Kavanaugh. Why us? Because it's a noble cause in their eyes to destroy a conservative judicial candidate, and I hope it blows up in their face. I hope politically they pay a price for this … losing is not enough, they need to pay a price at the ballot box."

"They didn't give a damn, but I hope America does," Graham said.

The senator's warm reception showcases the goodwill his defense of Kavanaugh has generated among the Republican Party's grassroots. At one point, while telling a story about what he and President Trump had in common—"I like him and he likes him"—Graham was greeted with shouts of "we like you."

Since the Kavanaugh hearings, Republicans nationally have seen a surge in support for both the president and congressional candidates across the country. Graham's visit to Nevada is part of a national get-out-the-vote effort by the Republican National Committee to ensure the party's base is sufficiently energized on Election Day.

"After Kavanaugh … if you're a Republican that isn't excited to vote than you're dead," Graham told the crowd. "If you're a Democrat and think your party has gone too far, teach them a lesson. … If you're the radical left who's trying to destroy this country, you can kiss my ass."

Thor Berg, a local conservative activist, told the Washington Free Beacon the Kavanaugh battle had roused his interest in this year's election.

"I wasn't excited about the elections this year until I had the unfortunate chance to sit down and watch the entire Kavanaugh hearing," Berg said. "Watching what Dianne Feinstein and the other Democrats did to that man and his family, let alone what they did to [Christine Blasey Ford] got my attention."

The sentiment was echoed by a female attendee, who asked not to be identified because her husband belongs to a local teachers' union that endorsed Rosen.

"Quite frankly it's scary to imagine something like that could happen to one of my children," the woman told the Free Beacon. "The whole notion that someone can be guilty until proven innocent goes against every value we're taught to believe."

"I probably wasn't going to vote prior to the hearing, but seeing the way Democrats treated Kavanaugh changed my mind," she added. "I haven't always voted Republican, but I will this time."

At the rally, Graham urged all those in attendance to "send a clear signal to America" that the Democratic Party had gone too far in their attacks on Kavanaugh by electing Republicans, like Heller, up and down the ballot.

"We are in a fight, and this fight begins and ends in Nevada," the senator said. "If you want a knockout punch, if you want it to be over, then vote for Dean."

"For this to really matter they have to lose this election," Graham added. "So they know they can never do it again."