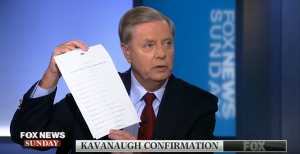 "This is a list that was compiled in November, but [Trump] actually put it out during the campaign," Graham told "Fox News Sunday" host Chris Wallace, as he held up the list. "There are twenty something people on this list; I'm asking Chuck Schumer, name five, name three, name one that would be okay with you."

Schumer and fellow Democrats tried to pressure Trump and Republicans to withdraw then Supreme Court nominee Brett Kavanaugh after several allegations of sexual misconduct surfaced. Kavanaugh didn't withdraw and was confirmed by the Senate in a close 50-48 vote to be a Supreme Court justice. Sen. Lisa Murkowski (R., Alaska) voted "present" to offset her no vote with the absence of her colleague Sen. Steve Daines (R., Mont.). Daines was at his daughter's wedding but was willing to come back to D.C. if his vote was needed. The vote was largely on party lines with Murkowski being the only Republican who didn't vote for Kavanaugh's confirmation, while Sen. Joe Manchin (D., W.Va.) was the lone Democrat voting in favor.

Graham added that Kavanaugh is a mainstream judge that any Republican president would have nominated. He said Democrats are trying to undo the 2016 election and prevent conservative jurists from being confirmed.

"Brett Kavanaugh was a mainstream judge I would've chosen if I had been president. [Former President George W.] Bush supported him. Everybody running for president on our side believe that Brett Kavanaugh and Neil Gorsuch were outstanding conservative jurists. The other side wants to cancel the election," Graham said. "So Chuck, you want someone new? Look at this list and see anybody you agree to, but what you want to do Senator Schumer is to overturn the election. We are not going to let you pick the judges. If you want to pick judges, then you need to win the White House. When Obama won that, I voted for two judges that he picked. So Chuck Schumer, name one person on this list you think is acceptable."

Senate Democrats attempted to block Kavanaugh's confirmation by using allegations of sexual misconduct lodged against him in recent weeks. Democrats have called the allegations credible with several stating that Kavanaugh doesn't get the presumption of innocence. Sen. Cory Booker (D., N.J.) said it didn't matter if Kavanaugh was guilty or innocent, he should have withdrawn regardless.

This infuriated Graham. During Kavanaugh's second hearing, Graham exploded at his fellow Democrats and accused them of conducting an "unethical sham." The way Kavanaugh was treated by Senate Democrats has caused Graham to start campaigning against some of his colleagues, something he said he's never done before.

"I've never campaigned against a colleague in my life. That's about to change. I'm going to go throughout this country to let people in these purple states, red states were Trump won, know what I thought, know what I think about this process," Graham said.