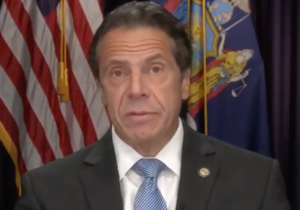 "Look, I think these guys are bad guys," Cuomo said during a discussion on MSBC's "Morning Joe" about a feud the state of New York and the NRA are engaged in.

The discussion focused on disagreement over the NRA-backed insurance policy Carry Guard, which is intended to provide legal protection during potential criminal and civil proceedings for gun owners who legally use a firearm for self-defense. The NRA Carry Guard website points out that "without insurance, lawful self-defense can cost you a fortune."

The insurance is no longer available in New York, and host Mika Brzezinski asked if New York is "blacklisting the NRA," an argument critics have made.

Cuomo, however, argued Carry Guard insures an individual for committing an "intentional bad act," which is illegal in the state.

The governor accused the NRA of bullying and threatening politicians to side with them in political matters.

"But, look, from my point of view, I do disagree with [the NRA] politically, and if they have less money to bully and threaten politicians into irrational positions, you know, I'm not going to lose any sleep over that. And if they went away, you know, I would offer my thoughts and prayers, Joe," Cuomo said.

While Cuomo focused on the issue of Carry Guard, the disagreement extends beyond the one issue. The NRA filed suit against the New York State Department of Financial Services and Cuomo in May, alleging they violated the group's First Amendment rights.  The suit claims the governor and the regulatory agency he oversees "have engaged in a pressure campaign against financial institutions that deal with the NRA," the Washington Free Beacon reported.

"Directed by Governor Andrew Cuomo, this campaign involves selective prosecution, backroom exhortations, and public threats with a singular goal—to deprive the NRA and its constituents of their First Amendment right to speak freely about gun-related issues and defend the Second Amendment," lawyers for the gun rights group wrote in their filing. "To effect their sweeping agenda, Defendants issued public demands that put DFS-regulated institutions on notice to ‘discontinue their arrangements with the NRA' and other ‘gun promotion organizations' if they planned to do business in New York."

The suit alleged that the letter from Maria Vullo, superintendent of the state's Department of Financial Services, to a number of financial institutions it regulates amounts to a public threat against New York banks doing business with the organization. They went on to say the public letter was combined with pressure applied out of public view, which they said were tantamount to coercion.

Cuomo, nevertheless, said he would encourage fights against the NRA in other states too.

"When they said that loss of this insurance product is going to make such a significant difference on their revenues, I am now reaching out to the other states because I believe this insurance product is going to be illegal from a public policy point of view in most states and now that the NRA said this is a major source of revenue, I'm going to pursue it nationwide," he said.

The New York Democrat proceeded to call the NRA, which boasts a membership of over six million Americans, "bad guys."

"Look, I think these guys are bad guys, and it started from the Clinton administration with the SAFE Act that could have done great work, that the gun manufacturers supported until the NRA came in and literally pressured the gun manufacturers not to make an arrangement," Cuomo said in reference to the New York Secure Ammunition and Firearms Enforcement Act of 2013, which he signed into law in January 2013.