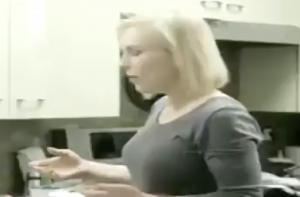 Sen. Kirsten Gillibrand (D., N.Y.) appears to not know what the word "banging" means when used in the context of describing something positively.

For their Showtime talk show Desus & Mero, hosts Desus Nice and The Kid Mero visited the 2020 presidential hopeful at her home in Troy, New York. In a pre-taped segment airing Thursday, she made the pair omelettes and revealed they were the first members of the media for whom she'd cooked.

"Who will come upstate, is the question?" she asked.

"But what if the breakfast you make is so banging, after this everyone wants to come up here?" Desus asked.

Desus smiled and restated the question, "If the food you make tastes so good."

A definition of "banging" flashed on the screen to laughter from the studio audience: "Excellent, of high quality."

DESUS: What if the breakfast you make is so banging, everyone wants to come up here?

She jokingly agreed with their idea of being hired as her "street consultants" if she became the president.

Gillibrand's appearance comes the week she officially declared her White House candidacy. She's barely registered in any national or early-primary state polls and has a poor favorability rating in her home state.

Knowing common slang expressions could be key to vaulting her into stronger contention.

Casting herself as the best candidate to take on President Donald Trump, she's giving a launch speech Sunday at the Trump International Hotel in New York City. She's voted the most frequently against his nominees and often accuses him of spewing "darkness" and "hatred" through his presidency.