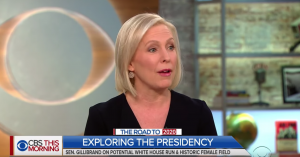 Democratic presidential candidate Sen. Kirsten Gillibrand (D., N.Y.) said during a Monday interview on CBS's "This Morning" that flip-flopping on issues was not part of her record.

CBS anchor Gayle King asked Gillibrand about the perception among Democrats that she's flip-flopped on issues and "betrayed" the Clinton family.

"It's still the talk of dinner party conversations about Senator Gillibrand that she flips and flops, that she betrayed the Clintons, that she seems to go with whatever the wind is blowing," King said. "I know you've heard that. How do you feel about that, and how do you address it?"

Gillibrand received an "A" rating from the National Rifle Association, opposed amnesty and driver's licenses for illegal immigrants, called for increase in funding for Immigrations and Customs Enforcement, and supported English being the official language of the United States.

She has now flipped-flopped on all those positions. She's called her previous positions "wrong" and "callous," saying she's now "embarrassed" and "ashamed" over them.