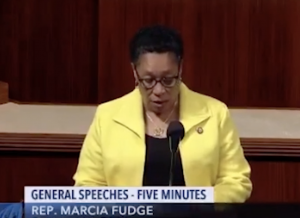 Rep. Marcia Fudge (D., Ohio) read a letter from one of her constituents Tuesday on the House floor calling many supporters of President Donald Trump "racist" and "just plain dumb."

Fudge spoke during the House's "Morning Hour," where members have five minutes to discuss any topic. She chose to share sharp words from Rev. Ronald S. Williams, the senior pastor and chief executive of Mount Zion Fellowship in Highland Hills, Ohio.

"It is glaringly apparent that many who support the present administration are either racist, steeped in religious beliefs, ignorant, or as my mother used to say just plain dumb," Williams wrote, in a clip flagged by the Daily Wire. "They have chosen to support a president who has a proven record of being sexually condescending to women, will not oppose the resurgence of the Ku Klux Klan and other hate organizations, is indecisive, condescending to anyone who challenges him and hides behind his Twitter account rather than dealing with the real issues in our country and around the world. To put icing on this cake, he's a proven liar."

Williams went on to say the United States was no longer a "democracy" and the country was "spiraling downhill quickly."

"The Republicans appear to have become a Trump cult and the Democrats refuse to move against this man in a collective, decisive way," he wrote, likening Trump to a dictator.

Fudge drew a rebuke from Rep. Marc Veasey (D., Texas), who was presiding over the House at the time, for reading out the comments, and a House Republican called her out of order.

"Remarks and debate may not engage in personalities toward the president, including by repeating remarks made elsewhere that would be improper if spoken in the member’s own words," said Rep. Marc Veasey (D-Tex.), who was then presiding over the House.

"What is a ‘personality?’ " Fudge retorted.

In the meantime, Rep. Larry Bucshon (R-Ind.) had approached the microphone for his turn.

"Are we in order here, or what are we doing?" Bucshon said to Fudge, before adding, "You’re out of order."

"And so are you," Fudge replied before leaving.

Ohio Republican Party chair Jane Timken said in a statement to Cleveland.com that she hoped it was just a "lapse in judgment" for Fudge, who promoted the moment on her Twitter account.

During today’s Special Morning Hour, I shared a letter from an OH-11 constituent concerning the current administration. Watch the video to view the full floor speech. pic.twitter.com/D3yx7lDECP