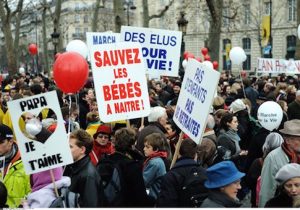 France's socialist government is attempting to crack down on pro-life activists by criminalizing online advocacy at odds with the nation's abortion regime.

On Thursday, the French National Assembly passed a bill that makes it a crime to post information online that challenges abortion. Pro-life activists who continue to operate online face up to two years in prison and a fine of more than $30,000. The bill is an expansion of a 1993 law that penalized giving out "false information" or physically blocking those seeking abortion from entering clinics. The bill passed by French lawmakers will punish web operators who post material considered "deliberately misleading, intimidating and/or exerting psychological or moral pressure."

The French legislation follows a controversy that erupted after the French government blocked an advertisement featuring smiling children with Down syndrome because it could dredge up feelings of guilt from woman who decided to abort babies diagnosed with the genetic condition in-utero. About 96 percent of all babies diagnosed with the condition are aborted in France. The two-minute ad featured testimony from Down syndrome children and adults, as well as their parents explaining that they were capable of living full and happy lives. In November a French court upheld the ban, saying the video would "‘disturb the conscience of women who, in accordance with the law, have made personal life choices.'"

French pro-life group Droit de Naître (Right to Be Born) told the Washington Free Beacon in a statement that the socialist government is trying to ram through pro-abortion legislation because of its dismal prospects in the upcoming French elections. The group said in a statement that it has begun circulating petitions and talking to activists to push back against the effort to police the web, television, and other means of communication.

"In the view of the Socialists [they are] the owners of websites and telephone lines—such as the Wire of Life established by the Droit de Naître—which inform women about the dangers of abortion and about avoiding recourse," the group said in an email. "The signatories of the petition initiated by Droit de Naître asked [French Interior Minister Bruno] Le Roux to abandon his project immediately [or] see his parliamentary group swept away during the next elections."

IVG.net, a pro-life website that provides information on alternatives to abortion—which is referred to as the "voluntary termination of pregnancy"—said in a blog post that the legislation violates the civil rights of French citizens.

"Extending the offense of obstructing voluntary termination of pregnancy is contrary to several fundamental principles guaranteed by French and international law, in particular the principle of the legality of offenses and penalties and the right to freedom of expression. It is a dangerous…text," IVG said.

Pro-life activists in the United States said that the crackdown on websites that provide information on alternatives to abortion demonstrate the political power of pro-abortion forces. They see it as a preview of the threats that the abortion lobby poses against the First Amendment protections of speech and religion.

"Pro-abortion extremists around the world, aided and abetted by their government allies, rely on the same bully tactics. They are desperate to distract the public from the ugly reality that abortion destroys lives," Susan B. Anthony List president Marjorie Dannenfelser said in a statement. "

Pro-life activists in the United States have dealt with similar attacks on their operations. In May, Illinois Democrats passed legislation backed by Planned Parenthood and other pro-abortion groups that would force pro-life pregnancy clinics and doctors to provide information or references to abortion clinics, regardless of their beliefs. In August, Republican Gov. Bruce Rauner signed the bill into law despite the fact that no Republican in the House of Representatives or state Senate voted for the bill.

Jeanne Mancini, president of the March for Life, said that the French response to the advertisement, as well as pro-life web content furthers "massive disability abuse."

"The sad reality is that babies who receive a poor prenatal diagnosis are highly disproportionately targeted for abortion," she said. "Shockingly only about one in ten little boys or girls with Down syndrome are carried to term. France’s new law will only further this massive disability abuse."

Dannenfelser said that the attempts to censor pro-life images and coerce pro-abortion messages would ultimately "backfire."

"Whether they are censoring pro-life websites in France, or forcing pro-life pregnancy centers to promote abortion in Illinois or California, their attempts to shut down free speech will always backfire," she said. "No matter how much power the abortion lobby can amass, the truth is more powerful and they are on the wrong side of it."

The French Senate will take up the bill on Wednesday.