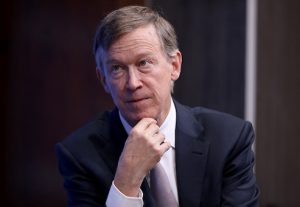 Former Colorado governor John Hickenlooper made official on Monday what many suspected: He is running for president.

News that the Democrat is in the race hardly comes as a surprise, especially given that local news outlets last week unearthed a permit application to hold an event in Denver's Civic Center Park this Thursday.

Additionally, Hickenlooper could barely keep the news to himself as he toured and mingled in the early voting states of New Hampshire and Iowa over the last five months.

"I'm running for president because we're facing a crisis that threatens everything we stand for," Hickenlooper said in a video he tweeted out early Monday morning.

"I'm running for president because we need dreamers in Washington, but we also need to get things done," Hickenlooper continued. "I've proven again and again I can bring people together to produce the progressive change Washington has failed to deliver."

Hickenlooper is already touting that during his tenure, "Colorado jumped from 40th in job growth to become the #1 economy in the country."

Conservatives have argued that much of that economic success during his tenure was due to an amendment in the state's constitution, the Taxpayer Bill of Rights (TABOR), which severely limits government's ability to impose new taxes because all increases must first be approved by a vote of the people. Supporters of TABOR argue that the provision not only prevents government overreach, it creates a more stable and predictable climate for business.

Hickenlooper is also set to appeal to progressives by pointing to gun control measures passed by the state in 2013 in the wake of the Aurora theater shooting that killed 12 and injured dozens of others.

However, as governor, Hickenlooper initially riled gun control advocates in the wake of the shooting by saying the perpetrator would likely have evaded any background checks or other measures, or possibly found some other way to kill.

"This person, if there were no assault weapons available, if there were no this or no that, this guy's going to find something, right?" Hickenlooper said in an interview with CNN in July of 2012, the same month the shooting happened. "He's going to know how to create a bomb. Who knows where his mind would have gone? Clearly a very intelligent individual, however twisted."

"And, you know, if it wasn't one weapon, it would have been another. I mean, he was diabolical. If you look at what he had in his apartment and what his intentions were, I mean, even now it makes the hair on the back of my neck stand up."

Hickenlooper also frustrated progressives by repeatedly thwarting or withholding his support for attempts by environmentalists to greatly restrict oil and gas drilling which boomed in Colorado over the last two decades. In October of 2018, oil and natural gas production in the state hit an all-time high.

Compared to other candidates in the field, Hickenlooper is expected to cut a more moderate profile as a consensus builder who finds compromise amidst polarization, as the video he released today clearly illustrates. However, this sales pitch has its drawbacks.

"Even more troubling, it's hard to point to a clear base for Hickenlooper—at least one big enough to propel him meaningfully in a national primary," the website FiveThirtyEight noted. "Contrary to his folksy image, the former big-city mayor doesn't have a great track record of appealing to rural areas. As governor, his administration's renewable-energy and gun policies alienated some rural counties so much that they symbolically voted to secede from Colorado."

Name-recognition will also be a problem for Hickenlooper, especially in an already-crowded field.

"Hickenlooper's campaign is basically starting from scratch," FiveThirtyEight also reported. "In early surveys of the Democratic field—which mostly reflect name recognition at this point—he is polling between 0 and 1 percent. Only 22 percent of Democratic respondents even have an opinion of him, according to an average of national favorability polls since the beginning of the year."