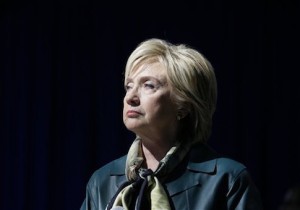 The FBI has seized four State Department computer servers as part of its probe into how classified information was compromised on former Secretary of State Hillary Clinton’s private email system, according to people familiar with the investigation.

The four servers, which were located at the State Department’s headquarters building, were seized by the FBI several weeks ago. They are being checked by technical forensic analysts charged with determining how Top Secret material was sent to Clinton’s private email by State Department aides during her tenure as secretary from 2009 to 2013, said two people familiar with the probe. The people spoke on condition of anonymity because it is an ongoing investigation.

No other details about the servers, including whether they are part of the department’s classified system, or used for unclassified information networks, could be learned.

A spokesman for the Clinton campaign did not respond to an email request for comment.

The FBI is trying to determine the origin of the highly classified information that was found in Clinton emails.

However, the task is said to be complicated because those with authority to create classified information have broad authority to label information in one of three categories: Confidential, Secret, and Top Secret.

The FBI is primarily concerned with trying to determine how Top Secret information made its way on to the private server.

Chris Farrell, an investigator with the public interest legal group Judicial Watch, said the State Department has been reluctant to describe the nature of its computer networks as some of the 16 Freedom of Information Act lawsuits the group has filed make their way through the courts.

Farrell said in an interview that the department also has been unwilling to say whether the private email system, used by Clinton and close aides Huma Abedin and Cheryl Mills, should be considered an official State Department network covered by FOIA laws.

Farrell said the seizure of the four State Department servers is likely part of the forensic investigation underway by the FBI into hardware used by Clinton and her aides to send email to the private server.

"In the midst of what I believe to be a forensic examination of the hardware that [Clinton lawyer David] Kendall surrendered on behalf of Mrs. Clinton, any serious national security investigation would seek to track all emails inbound and outbound," Farrell said. "If they are doing that tracking of email since she was secretary of state, then they would be looking at any email that could have crossed into a State server."

The servers were part of the State Department bureau of information resource management.

The bureau helps the department "to successfully carry out its foreign policy mission by applying modern IT tools, approaches, systems, and information products."

In addition to improving efforts of "transparent, interconnected diplomacy," the bureau is "focused on enhancing security for the department's computer and communications systems."

The FBI probe of State Department servers is the latest disclosure on the criminal investigation into the private Clinton email server that has embroiled the leading Democratic presidential candidate for several months.

The FBI took possession of Clinton’s private email server last summer after classified information was found in some of the more than 30,000 emails Clinton turned over to the State Department.

The investigation began after I. Charles McCullough, the intelligence community inspector general, reported to Congress Aug. 11 that Clinton’s private emails included some highly classified information labeled "Top Secret//SI/TK//Noforn." Information classified at that level is deemed by the government to be very sensitive, requiring strong security protections because its compromise would cause grave damage to U.S. national security.

The politics surrounding the probe prompted FBI Director James Comey to tell reporters last week that the bureau will not be influenced by politics.

"One of the main reasons I have a 10-year term is to make sure that this organization stays outside of politics, and if you know my folks, you know that they don't give a whit about politics," Comey said, adding that the FBI has devoted sufficient resources and personnel so that the Clinton email probe can be completed in a timely way.

Those remarks were the first official confirmation of the investigation.

The State Department contacted Clinton’s lawyer, David E. Kendall, seeking additional emails that were not part of the more than 30,000 emails provided to the department earlier, the Washington Times reported on Tuesday.

The email server material then became the focus of House investigators looking into Clinton’s handling of the terrorist attack on the U.S. diplomatic compound in Benghazi in 2012.

The House investigation of the Benghazi attack was attacked by Clinton this week after Rep. Kevin McCarthy (R., Calif.), the frontrunner to be the next House speaker, said the Benghazi probe was part of a political effort to diminish Clinton’s presidential prospects.

Clinton seized on the comments in a New Hampshire town hall meeting this week.

Asked if she would have investigated a member of a Republican administration amid charges of improperly using a personal email account and server, Clinton said, "I would never have done that."

"Look at the situation they chose to exploit to go after me for political reasons, the death of four Americans in Benghazi," she continued.

In a sign of increasing worries about the probe at the Clinton campaign, the New York Post reported that an unidentified legal aide to Clinton has advised her to hire a criminal defense lawyer.

The number of communications regarded as classified is about 400, according to the latest State Department release of emails. Three of the new emails released last month were marked secret, including emails relating to Iranian nuclear talks.

Security analysts have voiced concerns that foreign hackers may have breached the private email server.

One theory is that Clinton aides who were cleared for access to national security secrets first read classified reports on State Department information system and then "gisted" the material into private emails for Clinton.

Clinton spokesman Nick Merrill told the New York Times that none of the candidate’s aides had mishandled classified information.

"She and her team took the handling of classified information very seriously, and at home and abroad she communicated with others via secure phone, cable, and in meetings in secure settings," Merrill said.

The department said Clinton’s clearance was "revalidated" after she left office in 2013 and was done so as part of a standard practice allowing former high-ranking officials to be granted access to secrets.

Critics in Congress have called for Clinton’s clearance to be revoked based on the compromises involved in her use of the private email system.