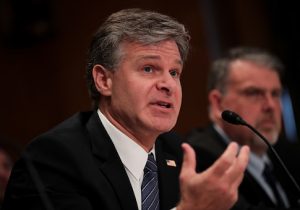 FBI Director Christopher Wray told Democratic Rep. Jerry Nadler (N.Y.) on Thursday that President Donald Trump has not asked him to take any loyalty oaths since he was confirmed by the Senate in early August.

Nadler, ranking member of the House Judiciary Committee, asked Wray several questions during a committee hearing about his interactions with Trump and the president's criticism of the bureau on Twitter.

"Has President Trump ever asked you to sidestep the chain of command and report directly to him?" Nadler asked.

Nadler then referenced former FBI Director James Comey's congressional testimony in June, when Comey said Trump told him that he needed loyalty from the former FBI chief at a private White House dinner back in January.

"I have never been asked by the president to take any kind of loyalty oath," Wray said. "My loyalty is to the Constitution, to the laws of this country, and to the good men and people of America."