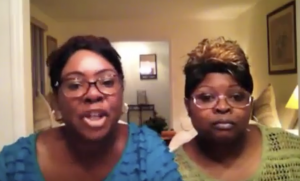 The flamboyant video blogging duo of "Diamond and Silk" will testify before the House Judiciary Committee next week as part of a "hearing to examine social media filtering and policing practices."

On Thursday, April 26, 2018 at 10:00 a.m. the House Judiciary Committee will hold a hearing to examine social media filtering and policing practices. This hearing will focus on what metrics social media platforms use to moderate content, how filtering decisions are made, and whether viewpoints have been silenced on some of the most popular and widely used platforms.

Lynnette "Diamond" Hardaway and Rochelle "Silk" Richardson are fervent Donald Trump supporters known for their enthusiastic boosting of the White House and evisceration of its critics. They recently claimed their videos were censored by Facebook as "unsafe," and their plight was brought up several times by Republican lawmakers during last week's Capitol Hill appearances by Mark Zuckerberg.

Although Diamond and Silk claimed Facebook didn't reach out to them to correct what Zuckerberg called an "enforcement error," multiple reports showed emails proving Facebook did in fact try to contact the pair.

One of the lawmakers to bring up Diamond and Silk to Zuckerberg was Rep. Marsha Blackburn (R., Tenn.), who will testify in the first portion of Thursday's hearing.