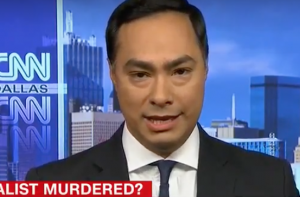 Castro said in a Friday CNN interview he was disturbed by the believed murder of Khashoggi, last seen entering the Saudi consulate in Istanbul, Turkey. Crown prince Mohammed bin Salman, also known as MBS, has publicly denied his state's involvement in Khashoggi's disappearance, but Turkey claims to have evidence the longtime critic of the Saudi government was murdered and dismembered inside the consulate.

"Let me get to the point that I think is most disturbing right now; the reporting that Jared Kushner may have with U.S. intelligence delivered a hit list, an enemy's list, to the crown prince, to MBS in Saudi Arabia, and that the prince may then have acted on that and one of the people he took action against is Mr. Khashoggi," Castro said.

CNN's Poppy Harlow immediately pushed back, saying, "Just to be clear, congressman, we don't have — I just want to be clear for our viewers, we do not have that reporting. I'm not sure where you're getting that from."

Castro appears to be referring to reporting from the Daily Mail that bin Salman "bragged about using classified intelligence from Kushner as part of a crackdown on ‘corrupt' princes and businessmen in Saudi Arabia." The piece did not name Khashoggi as one of the enemies named, and noted "there is no way to independently verify the truth of the boast."