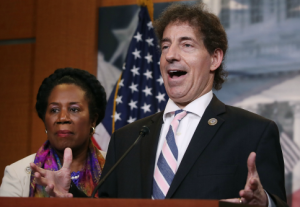 During a House Judiciary Committee hearing on Friday, Raskin grilled acting attorney general Matthew Whitaker over his involvement in the DOJ's decision to reverse an Obama administration policy regarding the legality of online gambling. In his line of questioning, Raskin accused the Trump administration of giving into "the demands" of Sheldon Adelson, a GOP donor who has long opposed the expansion of online gaming.

"When Donald Trump won and Mr. Sessions became AG and you became chief of staff … the Office of Legal Counsel found some subtle and invisible points of law that apparently escaped the Department of Justice back in 2011, and it reversed the plain reading of the interpretation which talked specifically about sports betting," Raskin said. "Were you involved in that decision?"

Whitaker told the committee that he and then-attorney general Jeff Sessions were not involved, as they had opted to recuse themselves from the matter because of their relationship with Charles Cooper, a former lobbyist for the Coalition to Stop Internet Gambling.

"Your inference that somehow that process was corrupted or corrupt is absolutely wrong and the premise of your question I reject," Whitaker said.

At the time, Raskin's question struck observers as peculiar given that the 23 other Democrats on the House Judiciary Committee chose to press Whitaker over his relationship with President Donald Trump, the ongoing-Mueller investigation, and immigration policy. Raskin's financial disclosure reports, however, appear to shed some light on the heated back and forth.

Since entering Congress in 2017, individuals associated with the lobbying firms of Hogan Lovells and Skadden, Arps, Slate, Meagher & Flom LLP have ranked among Raskin's top 10 campaign contributors. Individuals from Hogan Lovells contributed more than $22,000 to Raskin's campaign between 2016 and 2018, while those from Skadden donated more than $15,000 to Raskin in the same time period.

Raskin was among the top recipients of campaign cash from individuals associated with Hogan Lovells during the 2016 campaign cycle—behind fellow Democrats Hillary Clinton and senators Chris Van Hollen (Md.), and Michael Bennet (Colo.).

In total, Raskin has accepted more than $38,000 from individuals with ties to the two firms, which count a bevy of national and international online gambling companies on their clientele roster.

Both firms are retained by PokerStars, a website which controls two-thirds of the online poker market and is one the most profitable companies operating in the online gambling industry.

In 2011, PokerStars was one of the biggest beneficiaries of a legal opinion by the Obama-era DOJ that found the Federal Wire Act, which prohibits gambling over telecommunications systems that span state jurisdictions, only applied to sports betting. In effect, the opinion allowed individual states to legalize forms of online betting like internet poker—not involving sports. The decision was widely criticized from segments of the gambling industry, particularly the American Gaming Association, for failing to create uniform standards governing online gaming.

When the Trump administration took office in 2017, it undertook the process of reevaluating that decision. In November 2018, the DOJ ultimately found that no-sports betting was covered under the Wire Act and therefore illegal.

Despite the DOJ's new stance, most forms of online gambling were already prohibited by state and federal laws, including the 2006 Unlawful Internet Gambling and Enforcement Act. Currently Nevada, New Jersey, and Delaware are the only states with laws that allow online casino gaming.

Raskin's office did not return requests for comment on this story.