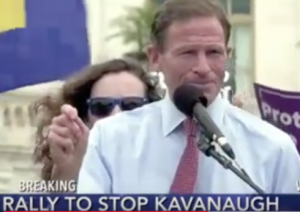 Sen. Richard Blumenthal (D., Conn.) said at a rally in Washington, D.C. that President Donald Trump would become a monarch if his Supreme Court nominee Brett Kavanaugh is confirmed by the Senate.

"The president would be a monarch if Brett Kavanaugh becomes a Supreme Court justice," Blumenthal told the crowd.

Blumenthal insisted that Kavanaugh's confirmation would amount to giving the president a "get out of jail free card."

"He is a way for Donald Trump to protect himself, because Brett Kavanuagh has said, just coincidentally, he doesn't think the president of the United States ought to be subpoenaed to a grand jury. How convenient!" he said.

Blumenthal was referring to Kavanaugh's views on the power of the presidency and how the president should be immune from criminal investigations or charges, or civil lawsuits, while in office.

Kavanaugh wrote in an article footnote that "even in the absence of congressionally conferred immunity, a serious constitutional question exists regarding whether a President can be criminally indicted and tried while in office."

The Washington Post noted that is "a mainstream view" and the Justice Department has written two memos (in 1973 and 2000) which stated the president can’t be indicted.

"He thinks the president can refuse to enforce a law even if the courts, including the U.S. Supreme Court say it's valid and constitutional," Blumenthal continued. "The president would in effect be a monarch."

Trump nominated Kavanaugh to replace retired Supreme Court Justice Anthony Kennedy. Kavanaugh, 53, clerked for Justice Kennedy and graduated from Yale Law School. He worked for former President George W. Bush before Bush nominated him to be a federal judge on the D.C. Circuit Court of Appeals.