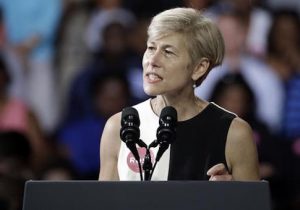 Records unearthed on Friday reveal that Democratic Senate candidate Deborah Ross once argued for leniency for a teenager convicted in a brutal rape case.

Ross, now embroiled in North Carolina’s tight Senate race against incumbent Sen. Richard Burr (R.), made the legal push when she worked as an attorney at the American Civil Liberties Union in the 1990s.

Andre Green, thirteen years old at the time, was convicted of first-degree sexual assault after he broke into his neighbor’s house and attempted to rape her. CNN reported the graphic details of the case:

According to court documents and the police report reviewed by CNN, Green broke a glass door to enter his neighbor’s home in the middle of a rainy night in 1994, after stalking her for six weeks. She immediately called 911, but Green–who was large for his age, standing at roughly 5-foot-10, 180 pounds–ripped the phone out of the socket. He swung at her with a broomstick, which broke apart after it hit a golf club she was using to defend herself.

Green punched the woman upwards of 15 times, tore off her clothes and used his fingers to penetrate her, while performing oral sex on her. The victim accused Green of penetrating her "once or twice" with his penis, according to court documents. He only stopped when the police arrived, running out the front door of the house–despite threatening to "rip her insides out," the records say. She was badly injured and bruised, while her son who witnessed the attack, she said, was emotionally scarred.

In her position as an ACLU attorney, Ross argued that the courts should show some mercy towards the teenager. Ross claimed that because of the teen’s low intellect and home life he should be eligible to be rehabilitated through the juvenile court system. Working alongside Green’s defense attorney, Ross petitioned that Green should not be tried as an adult to the state’s appeals court.

Her efforts were eventually denied by the courts and Green was sentenced to a life sentence for first-degree sexual assault. If she had been successful, Green would have been able to be released within four years of juvenile rehabilitation.

The revelations come as Ross has been on the campaign trail talking about her efforts to help those affected by sexual assaults.

"Too many women and children in this country and in our state know the fear of an unsafe home," Ross said recently on the campaign trail. Her campaign website also highlights her work on legislation to protect victims of sexual assault and hold those offenders accountable.

Helen Hare, a communications adviser for Ross’ campaign, said that the case was not about procuring the release of a violent criminal.

"Instead it raised a serious question about a scenario in which any child as young as 13 could be tried as an adult prison, without so much as the application of clear, objective standards across cases," Hare said.