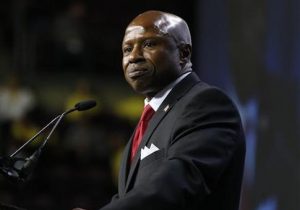 El Paso County Commissioner Darryl Glenn won the Colorado Republican primary on Tuesday, easily defeating his challengers for the chance to face off against Democratic incumbent Sen. Michael Bennet in the fall.

Glenn gained momentum after delivering a fiery speech at the GOP state convention in April, allowing him to secure a position on the ballot with 70 percent of the vote. Each of the other candidates made the ballot by collecting signatures. Keyser was dogged by controversy after it was discovered a subcontractor working for his campaign forged 10 signatures.

"But there is more! Ladies and gentlemen, there is evil in this world," he said. "But if you believe like I believe, we can handle that! You need to understand that there are radical Islamic terrorists out there and we have an administration that has failed to identify the enemy! America needs to step up and lead for once—we need to take back our country!"

Glenn faces an uphill fundraising battle, with only $50,000 cash on hand during the last reporting period, compared to Bennet’s $5.7 million. The Senate Conservatives Fund spent $500,000 on Glenn’s behalf leading up to the June 28 primary.

Following his primary victory, Glenn told KRDO News channel 13 he plans to hit Bennet on his support for the Iran nuclear deal, Obamacare, and EPA regulations.

"It doesn’t matter if you’re a Republican, Democrat, or Independent, you care about your country," Glenn said. "You care about energy independence, and you care about the fact that when you start thinking about what we need to do from a policy standpoint to enjoy economic prosperity, that’s what we’re going to focus on in this race."