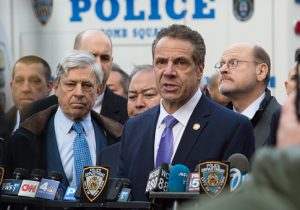 Democratic Gov. Andrew Cuomo (N.Y.)  on Wednesday accused the U.S. Immigration and Customs Enforcement of making illegal arrests in recent immigration raids across the state, describing its "aggressive tactics" as unconstitutional and "un-American."

Cuomo issued a "cease-and-desist" letter to ICE days after they concluded an immigration raid in New York City and its surrounding counties, picking up 225 suspected undocumented immigrants, 180 of whom had criminal convictions or pending charges, according to the agency. It is unclear whether Cuomo's letter to the United States government has legal standing as a cease-and-desist order, according to the Washington Post.

Cuomo castigated the raids during a news conference and in writing, accusing the immigration agency of raiding private property without warning and without identifying themselves. He also warned ICE agents of future lawsuits if they continue to use the same tactics. He said "the state will sue them, period."

ICE Director Thomas D. Homan fired back at Cuomo late Wednesday, saying ICE will refuse to "cease and desist from fulfilling our agency’s congressionally mandated mission of enforcing federal law." He added that the Democratic governor was "grandstanding" and that Cuomo's characterization of his agents was wrong.

Cuomo blamed what he described as an "alarming increase in the rate of arrests" and the "harshness" in [agents’] behavior" on Trump's rhetoric about illegal immigration.

"I believe ICE has been politicized, if not directly then indirectly," he said, "in that their aggressive tactics, aggressive behavior — unconstitutional, illegal behavior — is being fueled by the political rhetoric of the administration. … When you politicize law enforcement, now you are in a very bad place, and you are over the line. And whether that happens directly because [agents] are being told, or indirectly because they believe they’re following the spirit and the tone of the administration, that is a frightening place, and that is un-American."

Arrests Cuomo cited as possibly illegal included one made on a dairy farm, one in a private residence and one targeting a local immigration activist.

The dairy farmer, John Collins, who attended the news conference with Cuomo, said that armed officers raided his farm in Rome, N.Y., last week to arrest one of his workers. Collins said the officers did not present a warrant when he demanded to see one. When he attempted to film the arrest, an agent threw his phone and then handcuffed him, he said. The alleged undocumented immigrant, Marcial De Leon-Aguilar, a native of Guatemala had past convictions for aggravated assault and illegal reentry, ICE said.

"As an employer, I am responsible for protecting the people that are working on my farm," Collins said. "When the federal government comes to my property, they must have a warrant and they must treat my property and the people on my farm with respect. Neither happened here."

Sen. Kirsten Gillibrand (D., N.Y.) responded to the arrest by saying she was "deeply troubled" and calling for an investigation.