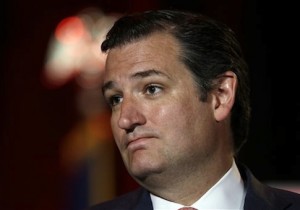 Sen. Ted Cruz’s (R., Texas) office called for an investigation on Thursday into the State Department’s funding of a nonprofit group that is assisting a campaign aimed at defeating Israeli Prime Minister Benjamin Netanyahu.

Nick Muzin, deputy chief of staff for Cruz, said the senator was "very disturbed by the reports that the State Department has funded an organization that's playing a direct role in trying to defeat Benjamin Netanyahu."

The OneVoice Movement, a U.S.-based nonprofit group that is partnering with the V15 effort to oust Netanyahu in Israel’s March elections, received two grants from the State Department in the past year, the Washington Free Beacon reported on Tuesday.

Cruz and Rep. Lee Zeldin (R., N.Y.) sent a letter to Secretary of State John Kerry calling on the State Department inspector general to investigate whether OneVoice has used any of the grant money to support its partnership with V15, and whether its actions violate its 501(c)(3) nonprofit status.

"We write to express strong concerns over the recent media reports that a U.S. taxpayer funded 501(c)(3) non-profit organization called OneVoice is actively working with a campaign operation called V15 or ‘Victory 2015’ in an effort to influence the outcome of the elections in Israel on March 17, 2015," wrote Cruz and Zeldin.

The letter requested more details on "the oversight and accounting process for how these funds are being spent" and whether OneVoice’s work with V15 violated its status "as a tax-exempt organization."

According to OneVoice, the State Department grants were not related to its Israeli election-related work and were used to support the Israeli-Palestinian negotiations championed by Secretary of State John Kerry.

"No payment was made to OneVoice after November of 2014," said Psaki in response to a question at the State Department press briefing.

Another grant was made to OneVoice’s branch in Ramallah, the Palestinian territories for "Work to Inspire Civic Participation Through Grassroots ACTIVISM." It ended on Nov. 1, 2014.

OneVoice development and grants officer Christina Taler told the Free Beacon earlier this week that the group was being careful to avoid spending funds on political activities.

"V15 is much more political than we are, so we’re just making sure we have a clearly defined line, especially with our funding—for all the obvious reasons," said Taler.

OneVoice is focusing on get-out-the-vote and voter registration efforts, according to Taler, who said the group is targeting "moderate" voters in Israel.

"We’re trying to assess through polling and data what does the moderate voter think and feel, to make sure their voices are heard in the next election campaign," she said.

OneVoice is also working with 270 Strategies, a consulting firm founded and staffed by Obama campaign veterans. Jeremy Bird, former national field director for the Obama campaign, is in Israel working with the anti-Netanyahu effort, Ha’aretz reported.

Martin Indyk, who served as Obama’s envoy for the Israeli-Palestinian negotiations until last summer, sits on OneVoice’s board. Obama’s former Middle East adviser Dennis Ross is also a board member.

The news about OneVoice’s partnership with V15 comes as Democrats have accused House Republicans of meddling in the Israeli elections by inviting Netanyahu to address congress in March.

V15 is led by Nimrod Dweck, who also runs a firm called Dice Marketing. The campaign will be releasing a number of videos targeting disenchanted voters and wavering voters who previously supported Likud, Netanyahu’s political party.