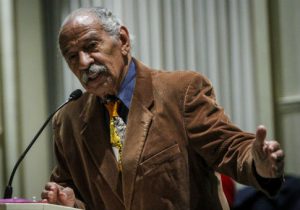 Rep. John Conyers (D., Mich.) announced on Sunday that he will step down as ranking member of the House Judiciary Committee.

"After careful consideration and in light of the attention drawn by recent allegations made against me, I have notified the Democratic Leader of my request to step aside as Ranking Member of the House Judiciary Committee during the investigation of these matters," Conyers said in a statement.

Here's the statement from Rep. Conyers saying he'll step aside as ranking member of the House Judiciary Committee pic.twitter.com/yxoDJvBz58

"Zero tolerance means consequences," Pelosi said. "I have asked for an ethics investigation, and as that investigation continues, Congressman Conyers has agreed to step aside as Ranking Member."

Zero tolerance means consequences. I have asked for an ethics investigation, and as that investigation continues, @RepJohnConyers has agreed to step aside as Ranking Member. No matter how great an individual’s legacy, it is not a license for harassment. pic.twitter.com/H5ikWy1iqT

Pelosi appeared to backtrack her previous "Meet the Press" comments where she called Conyers an "icon."

The announcement comes in the wake of accusations of sexual harassment by the Dean of the House, and a settlement made by his office with taxpayer funds.

Conyers was the chairman of the powerful committee from 2007 to 2011 and has been the committee's ranking member at all other times since 1995.

The new ranking member of the committee will be Rep. Jerry Nadler (D., N.Y.), who many believe was trying to get the job earlier this year. Conyers was given the spot again by Democratic leaders, partly due to pressure from the Congressional Black Caucus. Nadler released a statement regarding the matter.

"Even under theses unfortunate circumstances, the important work of the Democrats on the House Judiciary Committee must move forward," Nadler said. "I will do everything in my power to continue to press on the important issues facing our committee, including criminal justice reform, workplace equality, and holding the Trump Administration accountable. Ranking Member Conyers has a 50 year legacy of advancing the cause of justice, and my job moving forward is to continue that critical work."

Conyers is being investigated by the House Ethics Committee in response to the sexual harassment claims.