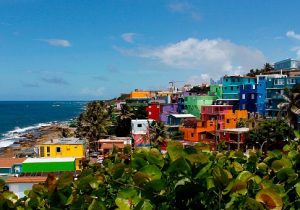 The CHC BOLD PAC, the fundraising arm of the Congressional Hispanic Caucus, came under fire this week for a delegation trip to a seaside resort in San Juan, Puerto Rico, during the government shutdown where its members mingled with more than 100 lobbyists, attended a viewing of the Broadway show "Hamilton," and met with Puerto Rican officials.

The trip was met with condemnation from a number of Republican leaders.

"Democrats in Congress are so alarmed about federal workers not getting paid they're partying on the beach instead of negotiating a compromise to reopen the government and secure the border," White House Press Secretary Sarah Sanders said of the trip.

"While [President Donald Trump] is in DC working to resolve the government shutdown and secure our border, Democrats are hitting the beach and partying with lobbyists," added Ronna McDaniel, chair of the Republican National Committee.

Luxury getaways are not new to members of the Congressional Hispanic Caucus, who spent hundreds of thousands on such trips in recent years.

The BOLD PAC experienced a record fundraising haul during the 2018 election cycle, pulling in $9.5 million in contributions. Rep. Tony Cárdenas (D., Calif.), who chairs the PAC, attributed the influx of cash to President Donald Trump's policies.

The uptick in cash to the committee coincided with increased spending on resorts, restaurants, nightclubs, and tickets to Vegas events.

During the last cycle, the BOLD PAC disbursed more than $200,000 on catering, lodging, and "facility fees" at the upscale Hyatt Regency Chesapeake Bay Golf Resort, Spa, and Marina in Cambridge, Md., its filings with the Federal Election Commission show.

Nearly $50,000 was spent by the PAC on catering at Las Vegas's Caesars Palace with an additional $6,000 expensed at the Omnia Nightclub, a nightlife venue located inside Caesars.

The group dished out $60,000 on lodging, food, beverage, and event deposits at Vegas's five-star ARIA Resort & Casino. Thousands more was used to purchase event tickets at the Bellagio and tickets to Michael Jackson One at Mandalay Bay.

Las Vegas Entertainment Productions; Sweet Tours, which provides tours of the Grand Canyon, Zion and Bryce Canyon, and Hoover Dam; and Vegas restaurants such as Zuma, which provides a "sophisticated twist" on the Japanese Izakaya style of informal eating and drinking, all received thousands from the BOLD PAC.

The group's recent trip to Puerto Rico also included a summit hosted by the Latino Victory Fund, a progressive group that aims to increase Latino representation at every level of government.

The Hispanic Caucus's PAC pushed $1,029,000 in contributions to the Latino Victory Fund during the 2018 election cycle, filings show. The PAC also reported $56,300 in in-kind contributions for research services to the fund.

Cárdenas, the PAC's chair, defended the Puerto Rico trip by saying they began planning for the trip a year ago and were in town to work.

"We started planning this a year ago and just because there's a Trump shutdown, it doesn't mean that the world is going to stop," Cárdenas said. "We appreciate and respect every single worker who's being punished by Donald Trump. But at the same time there's over 3.2 million Puerto Rican American citizens on this island that deserve for us to continue to do our job."

The BOLD PAC did not respond to inquiries on its expenditures.