Griswold: 'Transparency is good for democracy and we can do more'

Jena Griswold, the newly elected secretary of state in Colorado, advocates transparency for state lawmakers, yet recently declined to disclose internal communications from her office about the "National Popular Vote" effort that would be a constitutional workaround to the Electoral College.

Shortly after Griswold, a Democrat, testified to the Colorado General Assembly in favor of legislation aimed at having the state join the National Popular Vote Interstate Compact, the Washington Free Beacon requested communications from her office that referenced the compact spanning a two-week period.

Some communications were turned over as a matter of law under the Colorado Open Records Act. However, the secretary's office also noted that some documents were withheld because of the "work product" privilege, an exclusion prescribed in the law. The same statute that carves out the work product privilege also allows the elected official to turn over the documents voluntarily.

When the Beacon requested that the privilege be waived and the documents turned over, a legal analyst replied, "I'm sorry, but the Secretary does not release work product prepared for her."

The denial of emails and possibly other communications or writings comes just weeks after Griswold gave testimony to a committee in the state general assembly about increased transparency regarding campaign finance, but in which she praised transparency in broad generalities as well.

For example, Griswold spoke out against "secret political spending," saying "Coloradans deserve to know who is trying to influence their vote and how they are trying to do it."

"I do want to be clear on one point: I know this isn't going to be easy," Griswold said in testimony published on her state website. "There will be some Democrats and some Republicans who will say they have concerns about more transparency. But I believe that the majority of us here can agree that transparency is good for democracy and we can do more. Campaign finance reform is about making sure that everyone plays by the same set of rules; it's about giving voters the facts."

"Trust in government is at an all-time low," she added later. "But we can work together to answer our constituents' call for leadership. Let's take action to build a democracy that all Coloradans can believe in, and pave the way as a leader for the nation."

Usually the candidate with the most votes nationwide is also the winner in the Electoral College, but on rare occasions, such as in 2000 and 2016, that was not the case.

The compact would not go into effect until enough states have joined that their number of electors totals 270 or more, the figure needed to win the presidency. The states that have joined currently have a combined 172 electors, and Colorado currently has legislation moving forward that would add the state's nine.

State senator Jerry Sonnenberg, a Republican from northeast Colorado, is on the committee to which Griswold testified, and said the secretary should heed her own advice.

"I think it's disingenuous that she will release some things, and she won't release others," Sonnenberg told the Free Beacon. "She can talk transparency, but her actions have shown she is not transparent. These things aren't attorney-client-type privilege. Work product is something that if you want to be transparent about something, you ought to be able to release it."

Secretary Griswold did not return a request for comment.

Apart from Colorado, NPV legislation is also progressing in New Mexico. After the November elections, both states became Democrat "trifectas," where the party controls the state house, senate, and governor's chair.

‘Unity’ Is Like Pornography, Says Dem Senator Who Watched ‘Deep Throat’ with His Mom 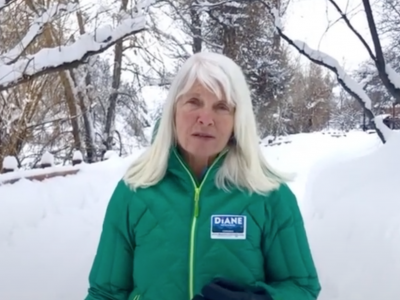