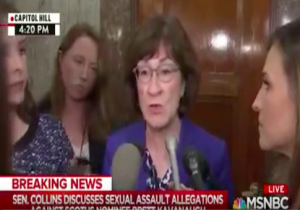 Sen. Susan Collins (R., Maine) said Monday that she does not have enough information yet to decide whether she believes the sexual misconduct allegations against Judge Brett Kavanaugh, adding that she wants both the Supreme Court nominee and his accuser to testify under oath before the Senate Judiciary Committee.

"In order for me to assess the credibility of these allegations, I want to have both individuals come before the Senate Judiciary Committee and testify under oath," Collins told reporters. "To be fair to both, we need to know what happened."

Collins was referring to the allegations made by California professor Christine Blasey Ford, who has accused Kavanaugh of sexually assaulting her at a house party in Maryland when they were both teenagers.

Ford first wrote a letter to Sen. Dianne Feinstein (D., Calif.) in July describing the allegations, saying that Kavanaugh was drunk and pinned her to a bed and groped her before she got away. Ford requested to remain anonymous at the time, and Feinstein did nothing with the information. After details of the story leaked out last week, however, Ford decided to reveal herself and publicize the accusations.

Kavanaugh has completely denied the allegations, as has Mark Judge, a friend of his who Ford said witnessed the assault.

Collins, one of the key swing votes in the confirmation process, noted that Ford wrote her letter in July but the allegations only came out last week, after Kavanaugh's confirmation hearings concluded.

"I noticed the date of the letter and wondered why the information had not been released long ago," she said.

The San Francisco Chronicle editorial board over the weekend castigated Feinstein for waiting so long to reveal the accusation against Kavanaugh.

"Do you believe Dr. Ford?" one reporter asked Collins.

"I don't know enough about Dr. Ford and her allegations yet to reach that kind of judgement," Collins responded.

The senator added that she spoke with Kavanaugh about the allegations last week and reiterated that he denies them.

"I asked Judge Kavanaugh when I had my final hour-long telephone call with him on Friday about the letter and the allegations that it contained," Collins said. "He emphatically denied that the allegations were true."