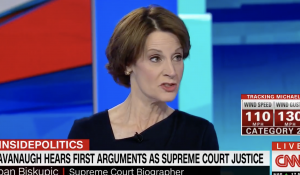 CNN legal analyst Joan Biskupic said Brett Kavanaugh would be "changing the law of the land" for the next 20 years as the newest Associate Justice of the Supreme Court.

Kavanaugh heard his first arguments on Tuesday as a Supreme Court justice, following one of the most contentious confirmation processes in the country's history. Progressives fought hard against Kavanaugh's confirmation due to his originalist jurisprudence and because he would replace Justice Anthony Kennedy, often viewed as a "swing" vote in many 5-4 decisions.

Biskupic described the scene as Kavanaugh listened to arguments for the first time and the significance of hearing him addressed by his new title.

"You heard one of the lawyers refer to Justice Kavanaugh, and it occurred to me that was the first time I was hearing that in that courtroom, and that he would be sitting there, John, for another 20 years, changing the law of the land, and as we've said so many times, moving everything to the right because he is succeeding a man who was much more of a centrist," she said.

Kavanaugh was confirmed by a razor-thin 50-48 majority in the U.S. Senate following accusations of sexual misconduct, including one of sexual assault as a high-schooler, that he emphatically denied.

President Donald Trump stood behind him and declared Kavanaugh had been "proven innocent" in a special ceremony at the White House on Monday.

Kavanaugh is the second justice Trump has successfully nominated to the Supreme Court, following the confirmation last year of Neil Gorsuch to the seat left by the late Antonin Scalia.