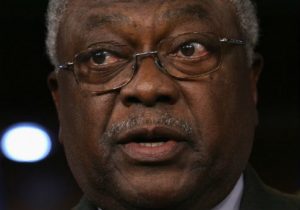 House Assistant Minority Leader James Clyburn (D., S.C.) on Monday equated President Donald Trump to Benito Mussolini while describing the state of the United States as similar to Nazi Germany and fascist Europe in the 1930s.

During a discussion with CNN’s Don Lemon, Clyburn said the current political climate is that of Germany in 1934, right after Adolf Hitler was elected chancellor.

"How do you see the State of the Union under President Trump?" Lemon asked Clyburn.

"Troubling," Clyburn said. "I can only equate one period of time with what we are experiencing now, and that is what was going on in Germany around 1934 right after the 1932 elections when Adolf Hitler was elected chancellor."

The assistant house minority leader was part a panel of Congressional Black Caucus members, some who plan to protest Trump’s State of the Union Address on Tuesday by not attending and others who intend to be in the audience and "stare down racism."

Clyburn said much of "what is going on in the country today" can be compared to what Hitler did as chancellor of Germany. The congressman cited Hitler’s silencing of the media, disruption of the judicial process, and the intertwined system of church and state, citing how swastikas were hung in churches.

"When I see, and hear, and experience what is going on in the country today, I think back to that time. And I really believe that we as Americans had better get a handle on things. If we don’t, we could very well see ourselves going the way of Germany," Clyburn continued.

Lemon told Clyburn it was a "stark comparison" to equate Trump to Hitler and the current political climate to one that resulted in the Holocaust.

Clyburn clarified that in this instance, for the sake of comparison, Trump is more like the Italian fascist leader Mussolini, and Putin is Hitler.

"If I were making that comparison, then this president would be Mussolini and Putin would be Hitler," Clyburn said.