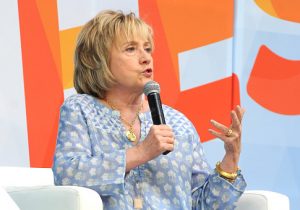 Despite new poll numbers showing her popularity remaining at a record low, Hillary Rodham Clinton is set to appear as the headliner "special guest" at a fundraiser in New York City, aimed at benefitting four women candidates for attorney general this November.

Candidates slated to appear are January Contreras (Ariz.), Dana Nessel (Mich.), Kathy Jennings (Del.), and Tish James (N.Y.), according to the invitation. Of the four, Contreras and Nessel are considered to be in the most closely contested races at the moment.

A rating of AG races across the country by Governing.com in June described Arizona as "lean Republican" and Michigan's race as a tossup.

"Three weeks from election day and Dana [Nessel] is 650 miles away from SE Michigan and January [Contreras] is 2,500 miles away from home," said Zack Roday, communications director for the Republican Attorneys General Association. "They are hobnobbing in New York City with liberal elites and Hillary Clinton. Hillary is one of the most unpopular politicians in America. Gallup had her at 36% approval a few weeks ago. I sure hope they ask her to come to Arizona or Michigan."

Neither the Contreras nor the Nessel campaign returned requests for comment, but a spokeswoman for DAGA highlighted the fundraiser's emphasis on electing women.

"Women supporting women and seeing more women run for elected office is not only incredibly important right now, but something that is being celebrated by both Democrats and Republicans," said Lizzie Ulmer, spokeswoman for DAGA.

AG offices have become increasingly important to the national strategies of both Republicans and Democrats in recent years.

During the Obama administration, Republican state attorneys general were key to slowing the president's agenda through lawsuits against policies such as the Affordable Care Act and the EPA's Clean Power Plain.

Once President Trump took office, that script flipped, as Democrat AGs pushed back by initiating legal challenges to his travel ban, parts of his immigration and environmental policies.

Another special guest at this evening's fundraiser is Karl Racine, the Democrat AG in the District of Columbia who has sued the Trump administration over the Constitution's "emoluments clause," for the president's ongoing financial stake in commercial interests such as the Trump Hotel in D.C.

Ellen Rosenblum of Oregon is also highlighted on the invitation. The Washington Free Beacon has reported this year how Rosenblum's office has accepted and deputized a special environmental attorney who is not paid by the state, but instead is essentially funded and sponsored by former New York City Mayor Michael Bloomberg.