Gregory Milne, currently the Clinton Foundation’s director of metrics, impact, and information, emailed Clinton’s chief of staff Cheryl Mills on Oct. 22, 2012 to ask whether a meeting could be set up between the secretary of state and executives at Greif, Inc., an industrial packaging company that has contributed between $100,001 and $250,000 to the Clinton Foundation.

'The Greif team, David Fisher, CEO and Scott Griffin, CSO asked if they might be able to grab two minutes of your time today to discuss new developments with their water backpack project and their USAID grant application," Milne wrote to Mills. 'They also would obviously like to meet HRC, if possible. Thanks." 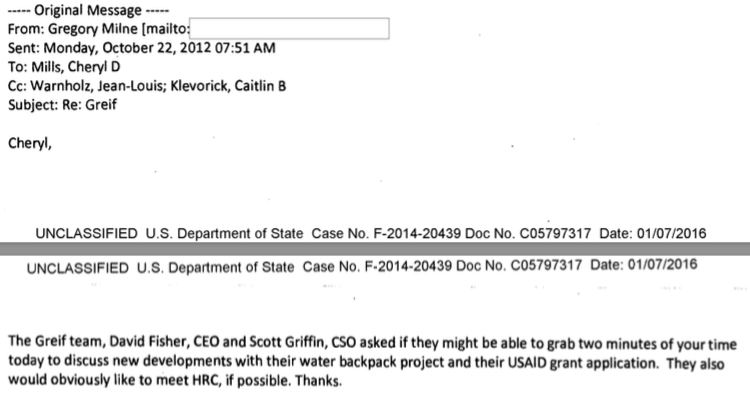 Within 30 minutes, Mills replied to the email asking what time would work for them.

'What timing works?" asked Mills. 'We are wheels up."

In response, Milne added new people to the list of those needing a meeting with Clinton. 'Add Denis and Branson to the list of people who would like to say hello to HRC," wrote Milne.

The request from the Clinton Foundation was was forwarded directly to Clinton by Mills. 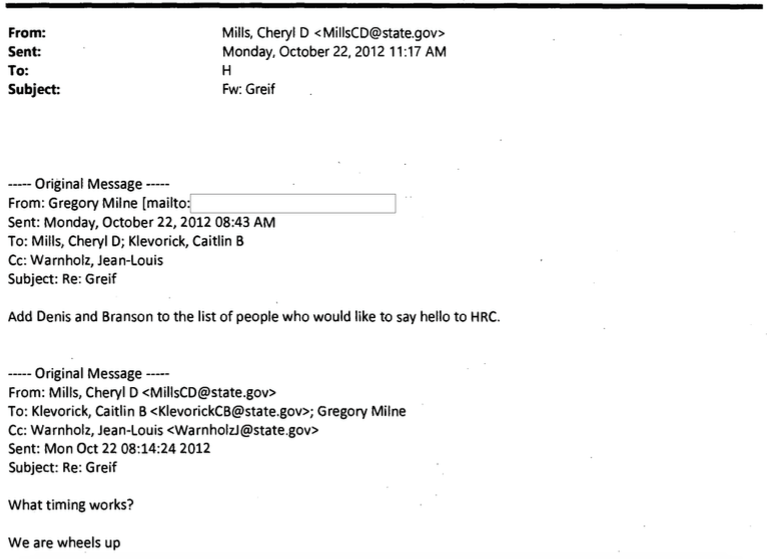 Griffin, who currently serves as Greif's vice president of corporate communications, said in a phone interview that he never met with Clinton. The only people who met with the Greif executives were Mills and an assistant of hers, according to Griffin.

He explained that the meeting with Mills was to discuss Grief's Africa and Haiti work relating to the company's water transport backpacks. Last year, the Clinton Global Initiative announced a partnership with Greif on a $1,750,078 project to distribute PackH20 in Africa to improve water and health infrastructure.

Griffin also said that the Clinton Foundation's request for Mills to "add Denis and Branson to the list of people who would like to say hello to HRC" was unrelated to Greif. The identities of "Denis and Branson" remains unclear, as does whether they were able to obtain a meeting with Clinton.

Greif had already partnered with CGI on five projects before the meeting with Mills occurred.

From 2007 to 2011, Greif commitments ranged from $125,000 for 'pollinator habitat improvement" in the United States to partnering on a $500,000 program in New York City 'that strives to provide students with the information and tools they need to make positive environmental changes in their own homes" such as reducing household energy use.

Clinton has been criticized for the closeness foundation donors had with her while she was at the State Department. Newly disclosed emails reveal that foundation donors would often email Mills to lobby for assistance from the department for their personal projects.

It has also been determined that there exists deep overlap between the foundation’s supporters and Clinton’s political supporters. A majority of the Clinton campaign’s announced fundraisers have also donated to the Clinton Foundation.