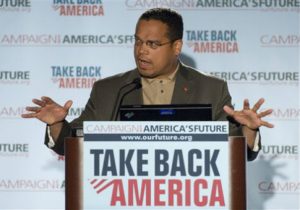 Rep. Keith Ellison (D., Minn.) said that Jews wanted to "oppress minorities all over the world" and referred to them as "slave traders," according to a former classmate interviewed by Mother Jones.

Ellison, one of the front-runners to be elected chairman of the Democratic National Committee in an election later this month, is one of the most liberal members of Congress and has been a vocal critic of the Jewish state of Israel throughout his decade in the House of Representatives.

Michael Olenick was the opinions editor at the Minnesota Daily at the time that Ellison, who then went by Keith Hakim as a student at University of Minnesota Law School, was submitting numerous op-eds defending Nation of Islam leader Louis Farrakhan.

Olenick, who is Jewish, told Mother Jones that Ellison's argument at the time was that "an oppressed group could not be racist toward Jews because Jews were themselves oppressors."

"European white Jews are trying to oppress minorities all over the world," Olenick said, recalling Ellison's argument. "Keith would go on all the time about ‘Jewish slave traders.'"

Ellison began attending a mosque when he was 19 and became more politically radical, according to the Mother Jones piece.

"Increasingly, he devoted his energy to anti-apartheid activism, and his columns took on a new urgency," wrote Tim Murphy. "He read a lot of Frantz Fanon, the Marxist anti-colonialist writer from Martinique, and in 1985 he attended a campus speech by Louis Farrakhan, the controversial Nation of Islam leader who blended calls for black empowerment with lengthy diatribes against Jews, gays, and other groups."

Ellison has long attempted to downplay his support for Farrakhan and the Nation of Islam, but Murphy wrote that Ellison was far more involved with the group than he currently says he was.

Organizers that worked with Ellison on his unsuccessful run to be a Minnesota state representative in 1998 told Murphy that Ellison would show up to campaign events wearing a Farrakhan-esque bow tie along with members of Fruit of Islam, which is the Nation of Islam's security force.

A Minnesota Nation of Islam leader said that Ellison spent several years as a "trusted member of our inner circle," officially serving as the local group's chief of protocol.