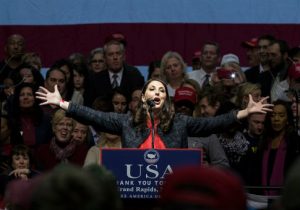 "I am thrilled to announce Charlotte as the official host city for the 2020 Republican National Convention," RNC chairwoman Ronna McDaniel said. "We look forward to seeing the Queen City take center stage as the Republican Party re-nominates President Donald Trump and Vice President Mike Pence to continue fighting for the American people."

The chairman of the RNC site selection committee said the city will provide the "ideal backdrop" as the party "continues its work to Make America Great Again."

"Charlotte has so much to offer, and we are excited to bring delegates to a city that has demonstrated its southern hospitality, showcased its vibrant energy, and proven that possibilities are endless," Ron Kaufman said. "I am confident the Queen City will be the ideal backdrop as the Republican Party continues its work to Make America Great Again."

"Charlotte’s booming economy is a prime example of how President Trump’s agenda is improving lives, spurring growth, and creating opportunity for millions of Americans," Parscale said. "We look forward to continuing our America First momentum here in the Queen City and delivering four more years of historic victories and tremendous success."

The convention, where delegates from across the country gather to formally nominate a presidential candidate for the party, becomes a temporary focus point of American politics. Cleveland hosted the the Republican National Convention in 2016 while Philadelphia hosted the Democratic National Convention. 2020 will not be the first time Charlotte will host a national party convention; it hosted the DNC in 2012.

The process of selecting a host city takes substantial time and involves visits to potential venues. Host cities must have a convention center or arena to host the main gathering, as well as plenty of space for accommodations for the thousands of people who stay in the city for a week. Security is also a major concern, and host cities work with the federal government and other agencies to ensure the event is safe.

Charlotte Regional Visitors Authority CEO Tom Murray said the city of Charlotte was proud to have won the selection.

"We are incredibly proud to have helped shepherd this opportunity on behalf of our great city," Murray said. "Charlotte has the collaboration, infrastructure and hospitality that will make the 2020 RNC an unforgettable experience for its attendees. We recognize and are prepared for the tremendous responsibility of welcoming 35,000 visitors to our community for this event and can’t wait to get started."