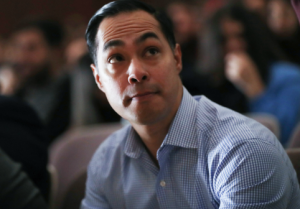 Former secretary of housing and urban development Julian Castro appeared to inadvertently endorse President Donald Trump's policy toward economic development in Central America while attempting to explain the contrast between himself and the president on immigration.

Castro, whose campaign for the Democratic presidential nomination has failed to generate traction in the crowded 2020 field, recently opined about the need for a 21st century Marshall Plan in Central America.

"Extending a hand of friendship, of opportunity to countries in our hemisphere—this approach is much more in keeping with our values," Castro told the Guardian. "This is a mutually beneficial way to engage Central Americans, not a slap in the face like the wall."

Castro's plan aims to increase public and private investment in Central America's Northern Triangle—El Salvador, Guatemala, and Honduras—in order to alleviate the violence and poverty that has led many of the region's residents to migrate illegally to the United States and Mexico.

"There will be greater stability in this hemisphere, people will find safety and opportunity in their own countries so they won’t knock on the door of the United States, and as China and others strike out in Latin America it makes more sense for us to have stronger relationships," Castro said. (He failed to provide specifics but promised the investment would be "bigger than we’ve ever done.")

Castro attempted to point out "how much a failure Trump has been on immigration." But instead of creating a contrast with the president, Castro's remarks appeared to offer an endorsement of the Trump administration's recent initiative addressing the root cause of Central American migration.

In December, the State Department announced it was backing a proposal by Mexican president Andres Manuel Lopez Obrador (popularly referred to as AMLO) to "create a zone of prosperity" in El Salvador, Guatemala, and Honduras. The proposal, dubbed by AMLO as a modern-day "Marshall Plan," seeks to invest $30 billion over six years on targeted programs to crack down on drug-related violence, rout corruption, and create jobs.

Trump has committed $5.8 billion in public and private funding to the initiative. The amount is more than double what the United States has provided since 2014 when the flow of migrants and unaccompanied children pouring over the border exploded.

The State Dept. also pledged a further $4.8 billion to southern Mexico. The funds will be used to assimilate the nearly 200,000 migrants entering Mexico illegally each year en route to the United States, which AMLO has agreed to absorb.

"Castro seems completely oblivious to the fact that the plan he's advocating for is already in motion. Nearly $5.8 billion has already been allocated by the State Dept. toward spurring development in the region," Ryan Berg, a research fellow at the American Enterprise Institute, told the Washington Free Beacon. "I don't really know where he's going with this or if he really, truly understands how difficult such a program would be to make work."

Berg, who specializes in Latin America and has written extensively on AMLO's Marshall Plan, is not confident Castro's proposal can succeed given the political instability and unique challenges existing in the region. The original Marshall Plan not only placed strict restrictions on how development funds could be spent, but also limited the criteria for which nations would be eligible in the first place.

Given that the success of economic development projects is measured in decades, not single years, Berg expressed skepticism that the flow of migrants from Central America to the United States could be stymied immediately. According to Berg, this is likely the reason that Trump has refrained from taking a singular approach on the topic.

"There's some irony that Castro is juxtapositioning his support for Central America Marshall Plan as a counterpoint to the wall," Berg said. "The president clearly doesn't see it as an either-or option, which is something I'm not sure Castro understands."

It is unclear if Castro knew of the Trump administration's agreement with Mexico or if he simply holds disagreements regarding program logistics, costs, and funding. Castro's campaign did not return requests for comment on this story.