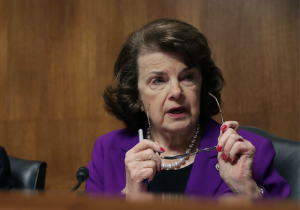 Progressives in California this week intensified their efforts to unseat incumbent Democratic senator Dianne Feinstein, linking her to President Donald Trump and deriding her for not behaving "like a Democrat."

A Progressive California is responsible for the ad, titled "Act Like Democrats," which calls on Californians to support state senator Kevin de León's bid to unseat Feinstein, who is seeking a fifth term in office. The Super PAC formed last October to back de León, who just ended his final term as leader of the state senate.

De León is vying to defeat Feinstein, 84, in California's Democratic primary on June 5, when candidates from all political parties will face each other on a single ballot, with the top two vote-getters moving forward to a head-to-head matchup in November. The race has further exposed the increasing progressive-establishment divide in California Democratic politics, with A Progressive California's ad illustrating some of the key divisions.

The ad begins by highlighting the "unexpected political blow" dealt to Feinstein when she failed to garner the California Democratic Party's endorsement at the party's convention in February. The ad then accuses Feinstein of not standing up to Trump, showing comments the senator made in August, when she said she hoped Trump could "be a good president."

The second half of the ad introduces de León, running a portion of his speech from the California Democratic Party Convention. The video juxtaposes de León's time in the California state senate, "where Democrats act like Democrats," with Feinstein's tenure in Washington, D.C., where politicians "equivocate on the sidelines."

"In your state senate, Democrats act like Democrats, and we've never been fooled into thinking Donald Trump can be a good president," de León says. "We fight on the front lines; we don't equivocate on the sidelines."

"Make no mistake," de León says. "I will be your champion for Medicare for All."

De León has made "Medicare for All" a focal point of his campaign, often citing his efforts to push single-payer legislation through the California state senate—while playing up Feinstein's opposition to the idea.

The ad ends with de León rebuking one of the main points Feinstein and her allies have used to make their case for her reelection: that without her seniority and clout in Congress, California's interests would be disadvantaged.

The ad highlights the challenges that Feinstein faces as she attempts to win reelection in a state that has increasingly shifted to the left.

In her last race in 2012, Feinstein won with 7.3. million popular votes, the most ever for a U.S. Senate election. That strong showing, however, did not prevent Feinstein from failing to garner the endorsement of the California Democratic Party this year—she only received 37 percent of the convention's delegates, while de León, who has never run for statewide office, captured 54 percent. Since neither candidate was able to cross the 60-percent threshold, the convention withheld a formal endorsement.

Feinstein's campaign did not return requests for comment for this story.

Dave Jacobson, a spokesman for A Progressive California, told the Washington Free Beacon that its latest ad ran on CNN and MSNBC programs across the Los Angeles media market.

"This ad serves as a public service announcement for voters and illustrates Senator Feinstein's comments saying that ‘Donald Trump can be a good president,' while simultaneously highlighting Senator Kevin de León's bold, progressive record and his efforts of standing up to Donald Trump," he said.

It is unclear how much the ad buy cost. Jacobson only said it was "five figures," a small number by California standards. As of the most recent Federal Election Commission filing period, A Progressive California had only raised $500 and was $9,498 in debt.

The small ad buy showcases the fundraising challenge facing de León as he seeks to compete with Feinstein's name recognition and donor network. To date, Feinstein's fundraising numbers have dwarfed those of her main challenger, with the former raising $13,006,349 to de León's $433,852. Feinstein also has $9,801,396 cash on hand, compared with de León's $359,261.

When asked who the ad's targeted audience was, Jacobson responded, "Anyone who wants to change Washington."

Watch the ad below: