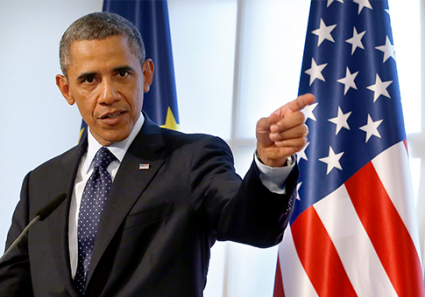 California law now requires framers of the state's curriculum to "consider including, and recommending for adoption by the state board" instruction on the "significance" of President Obama's election.

The state assemblyman who wrote the bill called the measure necessary to ensure that future generations understand Obama's presidency as a "historic step."

In a statement, the law's author rejoiced that Obama "will take his rightful place in California textbooks under legislation signed today by Governor Jerry Brown," which will be "the first step toward acknowledging President Obama’s legacy for generations to come."

The measure, AB 1912, requires the California Instructional Quality Commission to consider including instruction on Obama’s election during its next revision of history-social science curriculum. This curriculum hasn’t been updated in nine years, the bill’s sponsor, Assemblyman Chris Holden (D), said in a statement, and will not be updated until the 2015-2016 school year.

"We want to make sure that future generations understand that the election of our nation’s first African American president was a historic step in the effort towards equality and that previous elections involved intimidation and violence that prevented millions of African Americans from voting," Holden said.

The text of the bill includes a reverent list of Barack Obama's accomplishments, including "his extraordinary efforts to strengthen international diplomacy and cooperation between peoples" for which he received a Nobel Peace Prize.